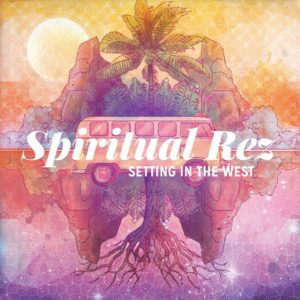 Releasing their 4th album Setting in the West today, Boston ska and reggae band Spiritual Rez took two and a half years to craft their latest effort, though the long writing process was entirely worth the wait. Working with producer Matt Collins of the band Eve 6 and with some of ska’s greatest bands such as Reel Big Fish and Dirty Heads, Spiritual Rez has released the perfect summer album. Labeling the band’s music as “the craziest reggae dance party you’ll ever be a part of,” the band mostly pulls from reggae influences for this new record though we hear some ska and funk inspiration as well, making Setting in The West a highly enjoyable release that is a great way to welcome the last days of the warm weather.

Opening the LP with the track “Sober,” Spiritual Rez introduces us to the chill vibes that their music gives off, performing slow Bob Marley style reggae music that sounds magnetic and glistens with red-hot vibes. Complete with horns, “Sober” is a perfect opener, perfectly setting up what fans can expect for the rest of the record.

“Bad Girl” featuring Billy Kottage of ska band Reel Big Fish, has an infectious horn riff throughout that gels throughout the rest of the album. While the track is not particularly snappy in tempo, “Bad Girl” has its moments of funkiness that make it hard to dislike. Tracks such as “Blue Faces” gives off a Jack Johnson vibe as front man Toft Willingham croons about being with a significant other.

“Tidal Wave” is a track that takes on more of a pop feel and is the records worst song. Not taking on the rest of the records personality, “Tidal Wave” lets listeners down for its bland sound and repetitive instrumentation.

To close Setting in The West, we have the song “Digital Age,” a calm number that is perhaps the most relaxed song on the LP. Using acoustic guitars and quiet horns Spiritual Rez has written a wonderful song that gives off incredible beach vibes, while writing a record full of tunes that will stick with the bands audience for a long time.

Check out the music video for “Sober” below.