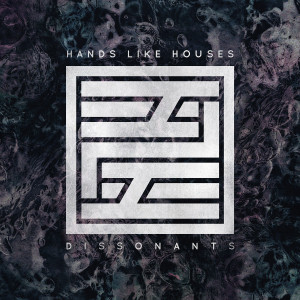 Australian rock band Hands Like Houses first came on to the scene in 2012 with their debut album Ground Dweller and have since been steadily climbing up the music industry ladder with the release of their latest record Dissonants securing their place in the music business for good.  Known for their unique sound which gels together rock, EDM and metal, the group have written an LP that is memorable while also demonstrating their skills to anyone who hasn’t heard the band perform. Opening track “I Am” leads Dissonants with a blistering edge that kick starts our addiction to Hands Like Houses. Sounding a bit like many of the hardcore bands that have come up in the last few years, their passion for their craft comes through their songs remarkably well, with an explosiveness that makes us feel like the records sounds are surrounding the audience.

“Colourblind” the releases latest single is focused around society’s obsession with binary ideas, such as white or black and right or wrong, and as we focus all of our attention onto these ideas we forget to view the world through a lens of color. While the song has the same feel as “I Am” its catchiness will certainly propel the band to become known on a much wider level. If they weren’t noticed before, “Colourblind” has the creative chops to change the Australian powerhouse and their current career path, making them come to the top of the music industries watch list even though they’ve been performing for some time.

“Division Symbols” is a cut that doesn’t let up on the bands forceful sound, but its chorus which hooks the listener in immediately is sung beautifully by front man Trenton Woodley, and is a perfect choice for a follow up single to “Colorblind”. While Hands Like Houses’ have strongly illustrated their creativity throughout the entirety of Dissonants, “Symbols” really does this well, making Dissonants a collection of music that you should not miss this year.

“Bloodlines” is a passionate song that wraps up the album perfectly, letting us know that Hands Like Houses are not for a fair weathered audience that latches onto a band until they are no longer the flavor of the moment. Instead, they desire to play for a passionate fan base that wholeheartedly loves their songs while pushing them to the forefront of the rock and hardcore genres.

Listen to “Colourblind” below. Dissonants will be out this Friday.