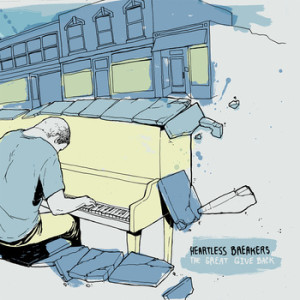 The Great Give Back is the first full length release from Salt Lake City rock band Heartless Breakers, though they are no strangers to recording as they have two EP’s under their belt, including the Prescriptions EP (2013), and Lighter Doses (2014.) Continuing with the same sound and style from the previous two EP’s, on their first album the group continues to put out quality music that shows no signs of getting old once music fans discover a new band. The record opens with “Right Mistakes”, a sharp track that introduces the group’s audience to their biting sound which blends with melodic harmonies sung by front man Matt Mascarenas.

“An Aching Kind of Growing” is the records next cut, and while its sound is far from a ballad, it is the first time the bands pace has let up since the album started, and while the group obviously had a change of pace in mind, it doesn’t have the relaxing effect the band was most likely hoping for, leaving its placement on the album feeling awkward. While the tune has a full sound which is rounded out by all of the band members singing together, it feels like a filler track, instead of a song that is an asset to the release.

The records last tune is the title track, and its slow buildup is a good one, as we hear the band experiment not only with different sound techniques on their instruments, but with their creativity, which breaks up the familiar monotony we sometimes hear in the Breakers chosen genre. Sounding similar to the Paramore tune “Future”, the song has the band playing music that is heavy and emotionally moving, which really gives The Great Give Back a lot of heart. The Heartless Breakers have released a solid debut that will stick in the minds of their fans for a long time and will allow the band to take their music to new heights as they become a better and more solid unit.