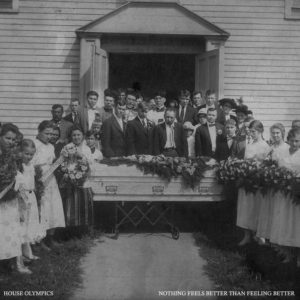 Nothing Feels Better Than Feeling Better, the latest EP from Bloomington, Indiana band House Olympics, is a blistering and urgent EP packed with four songs that pack more emotion into nine minutes than most full length albums. Straddling the genres of metalcore and punk, the band pulls off the energy and emotional weight that makes both of these genres so well liked.

The release’s opening song “Laugh Track” is anything but what the title suggests. Instead of something that sounds humorous, we get an emotionally charged song with a solid guitar part from front man TJ Jaeger and pounding drums from Brice Lanham, which becomes the aspect of the tune that stands out the most. Another component of “Laugh Track” that grabs the audience is Jaeger and his screaming, and while his vocals give the cut a sharp edge, it would be interesting to hear the band mix things up a bit by possibly adding in some clean vocals in addition to the screaming.

“When You Stop Doing Things, You’re Dead” is another song that pulls from the group’s punk influences, while also sounding like they took some inspiration from Florida metalcore act Underoath, as TJ sounds similar to the group’s front man Spencer Chamberlain, as he channels his feelings through his voice and lyrics.

“Running with Blade Arms” is the EP’s strongest track. A strong choice for a single if the group plans to release one, the number’s opening guitar riff will become stuck in your head as the drums drive the songs brutal rage. While House Olympics have released a solid set of tracks with Nothing Feels Better… adding cleaner elements along with a more melodic feel will certainly serve the band well on future efforts, while also becoming an act that you won’t want to miss.

Stream Nothing Feels Better Than Feeling Better below.