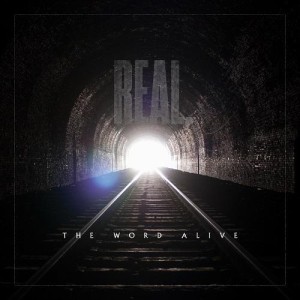 After a few listens to Real, the new album from Phoenix, Arizona metalcore band The Word Alive, you realize that they are one of the best metalcore bands on the scene right now. Real is released hot on the heels of other metalcore releases in the past couple of months including The Amity Affliction’s Let The Ocean Take Me and Miss May I’s Rise of the Lion, with both albums having an explosive feel, along with having a more mature sound. The production on Real is fantastic and each song is carefully written to reflect a change in the bands over all sound, though the changes are small ones. Forming in 2008, the band has released two EP’s and three albums, though the band did not start gaining recognition until their second album Deceiver in 2010. Formed by Escape The Fate front man Craig Mabbitt (who is no longer in the band) as a side project, The Word Alive has become a much bigger band than just a band to play in on the side, and Real sets the group on this path.

The first track on the album “Play The Victim” is a strong opening song that opens very much the same way as “Dragon Spell” does on Life Cycles, released in 2010. Rising in anticipation with crunchy guitars and a lot of double bass drums, we hear vocalist Telle Smith, switch between screams and clean vocals in the beginning of the track, making the band’s music more appealing to music fans that would not normally gravitate towards metalcore or The Word Alive. The component that is also the most noticeable on “Play The Victim” is Luke Holland’s drumming skills. A newcomer to the band, twenty year old Holland got his start on Youtube releasing drum videos playing along to various metal songs and also doing remixes of popular tunes. Known for his over the top drumming style, Holland is the perfect addition to The Word Alive, as his crazy drum parts really make or break each song on Real. “Never Forget” is Real’s second track, and by far one of the most emotional when it comes to the bands performance. While the song talks about loved ones who have died, the bands emotion behind the track doesn’t come off as to aggressive, due to the lyrics more simplistic nature. Telle’s vocals on the song once again switch between screams and clean vocals adding a more musical element to the record.

“Glass Castle” is another stand out tune on the album while also being one of the craziest. Luke’s drumming once again keeps everything together perfectly (the double bass drums are particularly tight), with guitarists Zach Hansen and Tony Pizzuti showing off their skills as two of the best up and coming metal guitarists. “Your Mirage” is by far the most poppy song on the album, and would work well for a single, since its song structure is not something that you will likely forget along with the chorus, with the screams and vocals feeding off of one another, making the song very thought out and well done. The guitar riffs throughout are also more intricate, showing the bands growth throughout each of their albums. The album’s last track “Collapsing”, begins slowly unlike any of the other songs on Real. It’s a nice experimental departure for the band, and after listening to the songs intro, listeners may want to hear more tunes like this, as it is something different than they have ever heard from the band. On this song, Telle puts all of his emotion and energy into the song, making it one of The Word Alive’s best tracks. The perfect change between being subtle and abrasive, The Word Alive have come a long way throughout their career and Real is the record to listen to if you are just discovering The Word Alive.