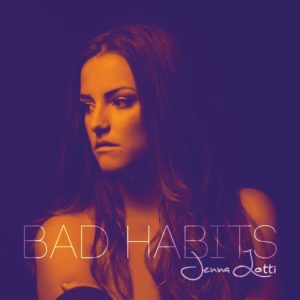 Boston based vocalist Jenna Lotti has released her retro inspired EP Bad Habits, bringing to light the influences of musicians who have come before her, placing Lotti in a different category than current pop singers.

Opening with the title track, Lotti’s music becomes mesmerizing right away as we hear her silky and smooth voice intersect with sparkling guitar and organ riffs which add a spicy texture to the song. Using her bold voice, we hear not only the beautiful vocals that Lotti possesses but also the tough female attitude that is needed to carry a song that has a lot of grit. Feeling like “Bad Habits” would be difficult to carry alone, the song is big enough for Jenna to balance on her own shoulders, as her confidence won’t be forgotten soon.

The third track on Bad Habits is “Drive,” a cut subtler in attitude, but enough vocal prowess to be memorable. Experimenting with pop inspired songs, Lotti replaces guitars and horns with synths, which unfortunately lets us down a bit. Excited to hear a woman sounding like she is ready to take on the world with the EP opener, “Drive” doesn’t have the same spark, and while it deserves to have a place on the record, it would have been better as a closing number.

“Passenger’s Seat,” ends Bad Habits with a song that acts as a bookend of sorts. Reintroducing horns into the track, Lottie sounds confident and enthusiastic about the music she has created, with a collection of tunes that serve as a great introduction to who she is as an artist. While it’s hard to anticipate Lottie’s future success, Bad Habits is the step to getting where she wants to go.

Listen to “Bad Habits” below.