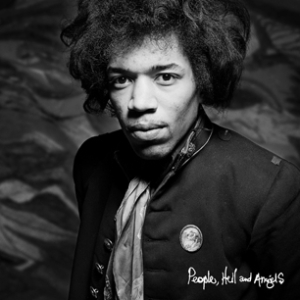 Creative and musical genius are two ways to describe not only Jimi Hendrix’s talent but also to describe what you hear on People, Hell, and Angels. The last of twelve posthumous releases, this latest material will cause listeners to wonder “what if”, concerning Jimi and his highly successful music career.  The tunes on People, Hell, and Angels were recorded shortly before his premature death from a drug overdose at the age of 27.

Songs such as “Let Me Move You”, featuring saxophonist Lonnie Youngblood is an R&B number where Jimi’s vocals could be compared to Little Richard. While Hendrix was always insecure about his singing ability, it shines here as he makes listeners feel the music through the vocals which sounds like it should be a long jam session. Musically, you can feel the heart that Jimi put into each recording, through his throaty vocals, and abstruse guitar parts.

“Hey Gypsy Boy” is an experimentation through different guitar techniques and shows the depth of Hendrix’s talent by using different sounds to create a cohesive musical sound, as only Hendrix can, by using the guitar as a form of expression. “Earth Blues” shows that Jimi has a knack for coming up with opening riffs that repeatedly hooks the listener into the rest of the tune, and serves as a preface to the guitar pyrotechnics that follows.

After listening to People, Hell, and Angels it is too bad that this is the last of unreleased Jimi Hendrix material, since one can only wonder about the progression of his music and what he might have gone on to do musically. While the world will no longer have new Jimi Hendrix music, at least his fans will still get from this new album taste of an enormous talent who passed on to early.