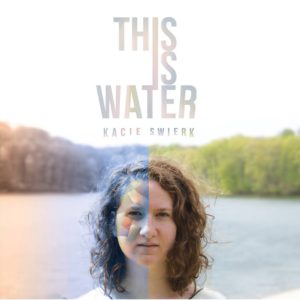 Currently studying music at Indiana University, in Bloomington, Indiana, Chicago born folk singer Kacie Swierk has released her debut album This Is Water, a strong 14 song record that illustrates her vocal and songwriting talents. Inspired to start a career in music after being put in a band in a college music class, Swierk decided she wanted to make music her profession. Inspired to write the album after moving to Seattle, Washington to receive treatment for chronic illness, and with no family, friends, or a piano to lean on, Swierk picked up the nearest instrument (a guitar) and the records second track “Resurrection Lullaby” was written.  On “Resurrection Lullaby,” Swierk weaves together peaceful acoustic guitar strumming with strings and a light trumpet, bringing a unique angle to her folk focused sound.

“Upon Me” is a beautiful song and This Is Water’s seventh tune. Still playing a slower time signature, it would be nice if Swierk brought in some more mid-tempo tracks given the reflective nature of her songs. With this thought in mind, Swierk puts the upbeat “Bonfire Blues” as the ninth track, standing apart from the other songs on This Is Water. Perfect to add to your summer playlist, “Bonfire’s” guitar riff has an easygoing flow while bringing the jazzy feel we’ve heard before on Water to give the record some head bopping energy.

Buried deep in the LP’s track list is “Far Away (Seven Seas,)” a real gem in Swierk’s expanding catalogue of songs. Featuring an appearance by vocalist Adam Berndt, a friend of This Is Water engineer Chris Aleexev, keeps the mid-tempo song going smoothly.

Ending with the short track “Closing,” we get to hear Swierk sing acapella, giving her audience a chance to really hear her voice without accompaniment. Overall, Swierk has written a memorable debut, even though nearly every song takes on a slower pace, possibly limiting her overall appeal.

While This Is Water focuses on the difficult challenges of illness, Swierk insists that she is currently touring and is already writing songs for her sophomore album.

Listen to “Bonfire Blues” below.