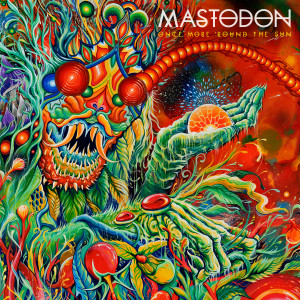 Mastodon are one of the most brutal and hard hitting bands today and their new album Once More ‘Round The Sun illustrates this characteristic incredibly well. The album is full of hard hitting drums, blazing guitar riffs, and rough vocals which don’t sound quite as jarring as some of the bands in the various metal subgenres we hear today. While Mastodon still scream with energy and grit, the albums complex feel demonstrates that they have been playing music for awhile, fourteen years in fact. The band got its start in Atlanta, Georgia when drummer Brann Dailor and guitarist Bill Kelliher moved from New York to the southern United States. They formed Mastadon after meeting bassist Troy Sanders and guitarist Brent Hinds at a Hell On Fire concert and discovered their mutual love of bands such as The Melvin’s, Neurosis, and Thin Lizzy. The band has released the albums Remission (2002), Leviathan (2004), Blood Mountain (2006), Crack The Skye (2009), and The Hunter in 2011.

Once More ‘Round The Sun, is a hard hitting and brutal album which attacks every note, and goes hard, all while never letting up for the entire length of the record. The album opens up with “Treading Lightly”, a song which begins with a light acoustic guitar strum that builds with each note, until the band comes in at full force, showing just how energetic the band can be, and what kind of sound they have established for themselves. Lead singer and guitarist Brent Hinds, leads the band vocally by putting forth a deep growl coupled with a gritty scream that fits the bands heavy sound perfectly, as their lighting speed guitar parts and abrasive drum beats need a voice that is strong and powerful. While the band does include clean vocals on the record, it wouldn’t be fitting to have Mastodon feature a singer who just sings. The vocals need to be almost overpowering in order to make the music really stick with you. For anyone who is just being introduced to Mastodon, than they picked the perfect album, since as a whole it represents the band and their style, as well as where they could go on their next release.

The third track on the album, “High Roads” begins with chugging guitars and a drum part that is complex timing wise, while not sounding overdone. Never going overboard with his drumming, Brann Dailor keeps things tight and solid while letting his band mates do most of the fancy guitar work that makes metal so complex and somewhat of a maze to listen to. “Asleep in the Deep”, veers away from metal slightly and shows the bands rock influences that they found in Thin Lizzy. Still going heavy, the group doesn’t sound quite as forceful on “Asleep” though they still live up to their gritty and memorable delivery, by writing a song that is well played and shows their ability to come up with different sounding songs that never sound exactly the same. This can be a hang up that many metal bands fall into, as they always try to create music that sounds at times so complicated and intricate that it’s hard for the average music fan to follow, while also being repetitive.

“Ember City” is one of the album’s last tracks and is probably the most intense out of all the songs on the record. Giving it their all, the band is back to creating complicated music that really fits the albums overall feel, with songs that have the same basic vibe, but still sound like completely individual tracks. While the band has released concept style albums, Once More ‘Round The Sun, feels like the band is trying to escape their past creative process while wanting to write songs that can stand alone. The guitar solos on “Ember City” are unlike anything we have heard on the album, and it solidifies the bands place as one of the better metal bands out there today. The album’s closing track, “Diamond In The Witch House,” is the records longest tune, coming in at eight minutes and thirty seconds long. While that could feel like a long time for a song to go on for, Mastodon doesn’t give off this feeling. Leaning towards the same style as “Ember City” we hear the band messing around with time signatures and growling vocals, almost like the band is trying to write the perfect last song to close the record. While it is isn’t perfect, it comes very close. With punchy and long drawn out shouting, the band has written a show stopping track, that will no doubt become popular at live shows as the band is completely out in full force, ready to fully kill it with their music.

While Mastodon have been playing together for a long time, after hearing Once More ‘Round The Sun, it is evident that the group will still be around in fourteen years as their music is memorable and will continue to make an impression on anyone looking for a record that attacks every note with vigor and passion.