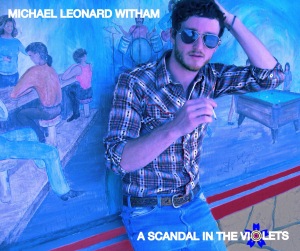 A Scandal in the Violets by folk and Americana musician Michael Leonard Witham is a very well done album, though it has its downfalls. Witham began his career in music completely on a whim, stemming from his childhood hobby of collecting junk. While Witham is originally from Arkansas, it was a trip to a dumpster in Indiana where Michael found his calling. During his dumpster dive, he found a beat up guitar that was missing so many components to the instrument that it probably wasn’t worth saving, unless Michael got creative. After seeing its potential, he fixed it up and got new strings, and then began to teach himself guitar. Each song on Violets is beautifully written, though the only negative aspect is Witham’s vocals. His voice is raspy and very gravely, and his different approach to singing will cause anyone who doesn’t enjoy authentic Americana to shy away from A Scandal in the Violets despite its strong musical foundation.

The album opens with “Sorry Girl but the Show is Over”, which starts with a quiet piano that is a great introduction to the musical portion of Michael’s record; however we have a difficult time enjoying the music due to his rough and gritty voice. Reminding us of Bob Dylan’s success despite the shortcomings of Dylan’s vocals, the aspect of Witham’s music that can help his burgeoning career is his songwriting abilities. A Scandal in the Violets has a story to tell throughout each song, and that is the highpoint of the record.

“Sideways Grin & A Wandering Eye” has a blues feel to it that reminds us of the American south where Witham hails from. The easygoing tune is a pleasant one to listen to, as it gives us a dose of a genre that really relies on telling a story, providing listeners with an authentic look at the songwriter and their roots. While Violets certainly succeeds in this area, we are still put off by Michael’s voice. Though with some vocal coaching, Witham has the potential to become a decent singer, but if he continues with the rough vocal presentation he is doing now, his music will continue to suffer when the listeners who don’t connect with his voice will begin to walk away.

The album closes with a folk and harmonica tinged track titled “Where The Witches Live” and the music is strong and peaceful. Overall, the music is the strongest aspect of Witham’s album and he is a very talented musician when it comes to writing songs. Despite its flaws, A Scandal in the Violets is a strong record as each tune has the ability to stand on its own.