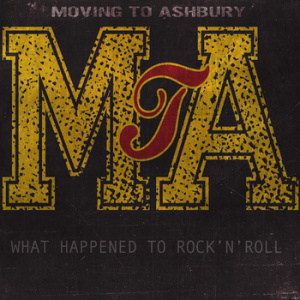 What Happened To Rock ‘N’ Roll, the new album from Swedish pop punk band Moving To Ashbury is a catchy, fun, and energetic album that is reminiscent of California punk act No Use For A Name, with pop stylings that reflect the bands radio friendly nature. The album opens with “Time To Let Go” a laid back rock and roll tune that perfectly represents the sound and style the band is going for on their latest release. While the recording has a rough sound, the band plays well, and even if you aren’t a fan of punk rock, you will still find something to enjoy from Moving To Ashbury, as their addicting songs won’t have a hard time getting stuck in your head. When listening to “Time” it is obvious that the band wants to get back to the roots of punk rock, and keep with the punk attitude, even though at times the group veers towards pop. The album’s next track “Go Off The Grid” dives into the punk attitude even further as the band plays with a fast urgency that is a staple of the genre. Still sounding like No Use For A Name, Moving To Ashbury still carves out their own identity, while still sticking to a style that is fun and rollicking.

“Pushing Boundaries” is not only the title of the next track, but an accurate description of what the band does throughout the song. On this tune, they push the envelope so that they don’t pigeonhole themselves as being just a punk act by writing a song that sounds ready for something more than a small club. Sounding big and explosive, Moving To Ashbury broadens their horizons to make them an even stronger band than they were at the beginning of the record. The next song on Rock ‘N’ Roll is “Your Last Song” which sounds heavily influenced by Slick Shoes with their polished and pop influenced style, which will inspire concertgoers to sing and mosh along with the band as they pull each listener into the music. What Happened To Rock ‘N’ Roll closes with “Untitled”, an acoustic song that is a nice change from the lively feeling of the records previous tunes. While this track would have been a nice bridge for the middle of the album, by ending the record with an acoustic song, a different picture is painted for the listeners who may believe that the band was only comfortable playing one style of music. Beautiful and calming, “Untitled” is a great album closer, and recording an acoustic album would be a great idea for the band as they sound wonderful when they have a stripped down feel. As the band heads towards the future, fans will have much to look forward to as Moving To Ashbury’s music is strong, memorable, and fresh.