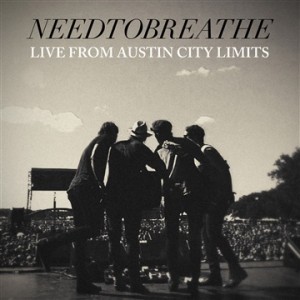 NeedToBreathe’s latest EP Live At Austin City Limits, is the group’s latest release celebrate the group’s upcoming North America tour. The EP is free through album streaming web site Noisetrade, where fans can enter a contest to win VIP tickets to NeedToBreathe’s upcoming tour and meet the band by downloading the EP. NeedToBreathe was formed in 2002, in Seneca, South Carolina when brothers Bo and Bear Rineheart, who both play guitar, began performing at coffee shops around Furman University in Greenville, South Carolina while the brothers were enrolled in college. After graduation, the brothers teamed up with friend and former drummer Joe Stillwell and bassist Seth Bolt. After signing to both Atlantic Records and Christian record label Sparrow Records in 2006, the band traveled to the UK to record their first album Daylight. The band has since released four albums with their fifth album Rivers in the Wasteland set to be released in April of 2014. While the bands lyrics have Christian undertones throughout their songs, the bands folk rock songs can appeal to anyone, no matter your beliefs. With a sound similar to The Kings of Leon and The Avett Brothers, NeedToBreathe mix their southern roots with a rock and roll sound to create songs that will not let the listener go until the record is over.

Their EP Live At Austin City Limits has this same style. The opening song “Devil’s Been Talkin’” is an acoustic song with thick Southern vocals from guitarists Bo and Bear that lets the listener become emotionally engaged in the song. The song has a country sound, with vocals that are emotionally gripping, as Bo Rinehart talks about having negative emotions that aren’t far from the devil’s grasp. With well written lyrics and infectious harmonies, NeedToBreathe stands out from other bands in the folk and rock genres, as they write songs that have a charm to them. Songs like “Keep Your Eyes Open”, is a great ending for the EP, as it ties together everything that NeedToBreath is all about. With great lyrics and wonderful musicianship, NeedToBreathe is a wonderful asset to the pop rock genre.