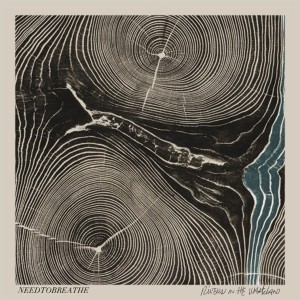 NEEDTOBREATHE is a band that can bridge the religious and secular worlds together very well, and the best part about their music is that they do it without turning anyone off.  On their new album Rivers In The Wasteland, there is enough God to keep their religious fans satisfied, and for the nonbelievers we get some religious references and songs that point directly towards the faith shared by the band, but these songs are scattered enough to make the band and their music enjoyable. Rivers In The Wasteland is still heading in the same vein as 2011’s The Reckoning, though we get more of a general perspective on the bands life and what influences them on their latest release. Brothers Bear (guitar, vocals, and piano) and Bo Rinehart (guitar and vocals) were raised in Possum Kingdom, South Carolina, but later moved to Seneca, South Carolina where they started performing. When Bear was enrolled in Furman University, the brothers began playing at coffee shops, and eventually teamed up with Joe Stillwell (drums) and Seth Bolt (bass) to form NEEDTOBREATHE. In 2006, the band headed to the UK to record their debut album Daylight, after they signed to both Atlantic and Sparrow Records. The band has gone on to release three more albums titled The Heat (2007), The Outsiders (2009), and The Reckoning in 2011.

The opening track “Wasteland” is a fantastic opening song that sets up the band’s sound and album themes perfectly. Sounding much like The Avett Brothers and even Kings of Leon, the song opens with an acoustic guitar that establishes that the band has deep southern roots, while also bringing their faith to the forefront without any explicit mention of Jesus or any other Christian figures. At the 3:10 mark we hear the entire band enter the song, which makes it sound fuller and much more powerful. While it does not have the same forceful feel of The Reckoning’s opening track “Oohs and Aahs” it presents a change of pace that fans will be comfortable with as the band still maintains their old sound while trying something new.

“Feet, Don’t Fail Me Now” is a rousing track that picks up the pace from the previous tracks. Its groovy guitar and the scuffling drum beat make the song a memorable one. The strong Creedance Clearwater style vocals from Bo and Bear add a nice edge to the track. “The Heart” is another acoustic song, and its standout component is the vocals, though this time it is from the entire band. The thing that really stands out about the composition of NEEDTOBREATHE songs is that they really know how to write songs that rock. It’s clear that the band does not need to mess with any heavy musical experimentation since they have found their sound entirely on Rivers…

“Multiplied” is a song that features another acoustic guitar with powerful vocals from Bear. And while the song focuses on religious themes, it doesn’t make their secular fans uncomfortable, most likely since the band is so good at what they do, it’s nearly impossible to ignore the band and their music. Rivers In The Wasteland is another standout album from NEEDTOBREATHE and hopefully this new album will be able to reach more audiences, whether you are into faith or not.