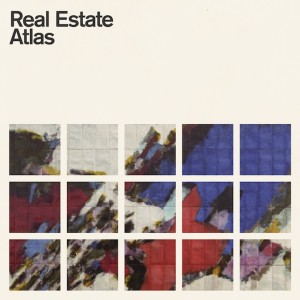 Indie rock band Real Estate is very good at what they do, almost too good. Their brand of indie rock is full of gleaming guitar riffs and open guitar chords that have remained largely unchanged for almost their entire career. Music fans that were hoping for something different on Real Estate’s newest album Atlas will be let down, as the record is nearly identical in sound to their last album Days. Forming in 2008, in Ridgewood, New Jersey Real Estate released their debut self titled album to critical acclaim. Days released in 2011, was a decent record with shimmering guitar riffs, and a quiet and relaxed sound that let their fans kick back and dream as the album lets you become immersed in the music. On Atlas, we get the same woozy pop music heard on their previous albums, but the one thing that has changed is the mood. Previously, we heard a band that had a happy attitude that seemed ready for a party at any moment. Now front man Martin Courtney is talking about things not being where they used to be, going to new places, and suburbia, a place that only adults would be interested in. If Atlas is a more grown up attempt at indie rock, it doesn’t work out to well, though there is a high points to this new release. The production on Atlas is beautiful. Produced by Tom Schick, he structures the sound to make sure the listener feels like they are in the same room with the band watching them perform, which makes the album a pleasing listen.

The opening track “Had To Hear” begins with Martin Courtney strumming open chords, along with drummer Jackson Pollis providing a solid beat without putting on a show. The breezy track will pull listeners in with its reflective sound, and at first we are excited to hear this incredible sounding album, but the sound remains largely intact throughout and offers nothing in the way of variety, making the album sound repetitive. “Crime”, half way through the record, has lyrics that revolve around anxiety and tossing and turning all night long. The narrator wants to bring someone along with him for the ride, perhaps his lover, before he crashes and burns. The song takes a somber turn lyrically, but the light and airy music doesn’t quite fit the lyrical content. At this point in the record, Atlas feels like one long jam, if that was the bands intent, we will never know. Recording the record live to tape was the way to go, as we get a sense of Real Estates tightness as a band, one of the more positive things about the planning of Atlas. “Navigator” the last song on the record is about opening the door to the future and in the case of Real Estate’s musical style the future looks bleak. While the band has the creation of great music down to a science, their lack of variety seems very blah and one dimensional.