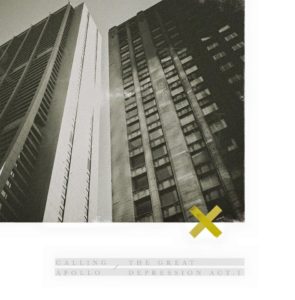 Calling Apollo, the latest alternative rock band to emerge from Cardiff, Wales, has released their new EP The Great Depression: Act 1, a beautiful record that rages with emotion and brilliant songwriting. Formed in 2012, the band released their debut release Vessels, while eventually releasing its follow up Hunter | Gatherer in 2015. Now they are back a year later with the release of their third EP, a dynamite release that clearly charts the group’s path perfectly.

Opening with “Light The Way,” listeners are hit with brutal guitars from Kevin Williams and emotive vocals from front man Christian Neale. Writing each song so it builds on the track following it, Calling Apollo has recorded a very cohesive release that has a large chance of helping them explode outside of Wales and the rest of Europe.

“Obelisk,” The Great Depression’s fourth track, is another banger, still keeping things aligned with the records hard hitting sound with drummer Zak Woolf really shining on this track, with his sharp rhythmic skill. “Act 1: House of Cards” is an eight-minute track that really displays the groups musical skills well. Complete with fiery guitar riffs, the song plays like a piece of artwork, with the band displaying every emotion possible throughout. Definitely the records strongest tune, its one that will become immensely popular with fans.

Lastly, The Great Depression: Act 1 closes with “…and the High Plateau,” that starts with a mellow opening, presenting a different angle to the band. While the acoustic opening is nice, it doesn’t come across as powerfully as the records other selections, making for a weaker ending, though it won’t deter fans from enjoying the rest of the EP. While current fans will enjoy this beautiful record, there is plenty to discover about Calling Apollo when listening to The Great Depression, as new fans will become attached quickly.

Listen to the track “Light The Way” below.