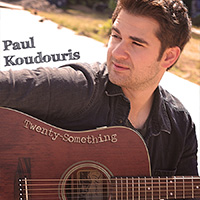 Paul Koudouris, is an independent self-taught singer-songwriter from San Antonio, Texas. After studying music and theatre at Point Park University Conservatory Program in Pittsburgh, Pennsylvania and Regents College in London, England, Koudouris has decided to pursue music on his own by sharing his own unique pop rock songs on his album Twenty-Something that will appeal to fans of Matt Wertz and Jack Johnson.

Note: The rest of this review can be found at www.coyotemusic.com