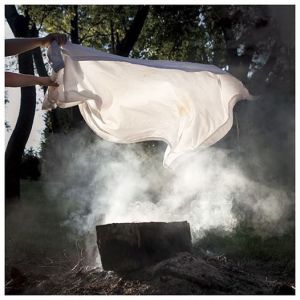 Fans of Pianos Become the Teeth are in for a surprise with the band’s new album Keep You. Formed in 2006 in Baltimore, Maryland, the band has made great use of their screamo influences by keeping their music pretty much the same throughout their two full length releases, Old Pride (2009) and The Lack Long After in 2011.  On Keep You, fans will notice that something is noticeably different on this new record as it sounds more relaxed and calming, since the band wanted to focus more on simplicity.  While front man Kyle Durfey still has the emotional vocal delivery we’ve heard throughout their career, he has almost completely ditched the screaming and has really focused on singing, which is something that brings an entirely new dimension to the band.

Keep You opens with “Ripple Water Shine” and right from the start we are hit with a song that sounds like something The National would write due to its dreamy vibe. While the bands past efforts were good, Keep You feels a bit more focused and like the band is really ready for this new direction that their music is taking, and “Ripple Water Shine” serves as a wonderful introduction to this new path. “Late Lives” dives more into emotions, and as fans have heard on previous albums, front man Kyle Durfey has used music to work through his father’s death, and while he is still working through those complex emotions on Keep You, it feels like the album can also help others through their loss, as it is the perfect soundtrack for anyone who is working through a difficult time of their own. During a recent interview discussing the album, the group said that the record is mostly written about the messages that we want to tell our loved ones, regardless of whether they are with us or not, and while this may be the last album to discuss death and loss, the more somber musical tone is more suited for the subject matter than the bands past efforts.

The album closes with “Say Nothing” a seven minute long track that is one of the bands best. While fans would previously think of them as strictly a screamo band, after listening to them play a slower song, mixed in with soft but grinding vocals, the band has now been painted in a different light. While it is still premature to say whether or not Pianos Become the Teeth will stick with a slower and more relaxed musical style for future records, Keep You is by far the bands best effort.

Keep You comes out today.