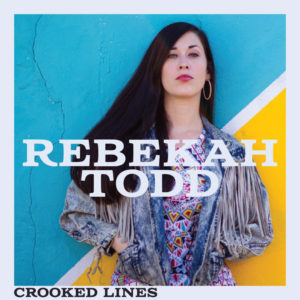 With a voice like Adele and Janis Joplin, North Carolina singer Rebekah Todd has released her debut record Crooked Lines. A soulful record that illustrates Todd’s hard work and dedication, Todd is an artist that blues fans should be paying attention to. Opening with the infectious track “Trouble,” Crooked Lines which was funded entirely by a Kickstarter campaign, will easily become one of your favorite records of the year. With not a bad song on the record, Lines is a pleasing listen from start to finish.

“Let Me Prove My Love” is a slow ballad that illustrates Todd’s sultry vocal style that she pulls off well. Reminding listeners of John Mayer’s record Continuum, the slow track is one where the audience is waiting for Todd to start belting out her powerful vocals, though while this doesn’t happen, we get to hear what Todd can do, making “Let Me…” one of the most enjoyable cuts on the album.

Released as the lead single on Crooked Lines, “Hustle” brings all the songs together and encompasses what makes Todd and her voice so likeable in the first place. Dabbling in funk for this track, it’s got a chorus that will become lodged in your head, with the audience feeling every note of the track making “Hustle” one of the most infectious songs of 2017.

“Wandering Soul” brings down the mood by incorporating an acoustic guitar into the record, an instrument we haven’t heard until now. While Todd is excellent at belting out the loud and funky jazz inspired tune, this song introduces another facet to her multi-layered sound, and while the country inspired strings don’t particularly fit with the rest of Crooked Lines, closing with a ballad ends the record nicely.

While Todd is still unknown, she has a huge task ahead of her in promotion and getting her music out to the world, though with an LP like Crooked Lines it is easy to fall in love with her right away, making a path to stardom much easier.

Listen to “Hustle” below.