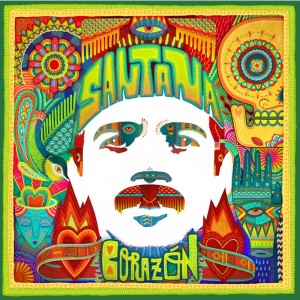 Santana’s latest album Corazon, is the guitar legends 22nd album. Santana has always been known for being a colorful guitarist and Corazon is no different. While Santana’s playing style has remained largely the same throughout his career, the biggest change on Corazon is that the album is almost entirely sung in Spanish, something Santana and his band have never attempted in over forty years of playing music together. Carlos Santana, the bands front man was born in Autlan de Navarro, Jalisco, Mexico. He began playing guitar at the age of eight, and has named Ritchie Valens as one of his earliest influences, as Valens was one of the few Latino guitarists to make an impact in rock music in the 1950’s. After Carlos moved to Tijuana, Mexico as a child, his family eventually moved to California and settled in San Francisco, and after discovering the cities booming music scene in the 1960’s Carlos decided to pursue a career in music after several years of working odd jobs. The band would go to receive international fame and critical acclaim after their performance at Woodstock in 1969.

The album’s first song “Saideria” features Samuel Rosa, and kicks off the album which bursts with Latin flavor from the very first note. On first listen the track is incredibly colorful and vibrant, setting the stage perfectly for the rest of the album. Over the course of Corazon, Carlos teams up with various Latin music musicians such as Gloria Estefan, Nina Pastori, and even Ziggy Marley, the famous son of reggae musician Bob Marley, leading Santana to stray slightly out of the box, while keeping up the vibrancy that makes the album stand out. “Oye 2014” shows the relevence that Carlos wants to keep as he features Pitbull, a Mexican rapper, who intersperses Spanish with English as he raps on the track. Over the years, Santana has done some great collaborations, particularly with Michelle Branch and Rob Thomas, but the Pitbull collaboration can join the long list of interesting musical pairings that Santana has participated in. While the two genres are very different from each other, on “Oye 2014” both musicians complement each other, while proving that Carlos hasn’t gone creatively dry, much like his older industry peers, such as Bruce Springsteen. “Besos de Lejos” features Latin singer Gloria Estefan, and while she hasn’t released any new music of her own in several years, on “Besos” she has smooth vocals, that compliments Santana’s “talking” guitar.

The Latin influence on the song is right in your face on this track, and it will take several listens in order to hear all of the instruments. While some fans might be frustrated with Spanish being the album’s dominant language, Santana has crafted an album where language barriers do not matter, as the entire album is enjoyable regardless of whether you are fluent in Spanish. The last song on the album “Amor Correspondido” featuring Diego Torres is slightly more pop sounding than the rest of the record. Diego’s vocals are the main focus of the song and his soulful voice makes the track a beautiful one. On Corazon, it is clear that Carlos has not missed a beat, and while he is considered a veteran in the music business, he still plays like he hasn’t aged a day since the bands early years. Still exuberant and descriptive in his playing, Corazon proves that Santana will never lose his legendary status.