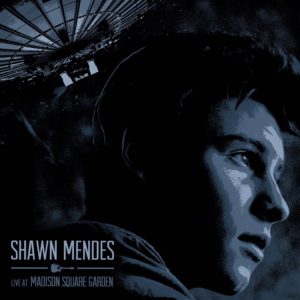 When he began creating six-second videos on the iPhone app Vine in 2013, Canadian teen Shawn Mendes never guessed that he would one day be on stage at Madison Square Garden in New York City singing in front of thousands. Releasing his debut record Handwritten in 2015 at the age of 16, the album spawned several hits, and with a strong social media presence, Mendes has slowly climbed his way to the top.

Immediately selling out, fans were lucky to score a ticket for the performance at The Garden, though for those who could not attend the show, Mendes surprised fans earlier this week with a surprise live album which includes most of the performance, titled Live at Madison Square Garden. On the LP is a collection of fan favorites and a few new songs and medleys, giving his audience a fair taste of his short time as a performer. But what is really represented well is Mendes and his passion for music and how good he has become at honing his craft, all while being at least a decade younger than many of his peers in the music business.

Opening with the B-side “The Weight” off Handwritten, Mendes is audibly nervous as he thanks the crowd for coming to the show and the insanity of playing such an iconic venue. Kicking off a sing along which the entire crowd participates in, it’s an interesting move to start off with such a raw song, though this speaks of Shawn’s desire to not only pull his audience in his with his songwriting, but his wish to be a remembered musician that outlasts the teen idol fame he is currently experiencing.

With an incredibly balanced sound and a voice that translates over well to the stage, we feel Mendes and his passion, making the album into an event we wish we were there for. “Treat You Better” was the second song of the night, and Illuminate’s lead single. While Mendes premiered new tracks at New York City’s Radio City Music Hall performance one month prior, fans were already familiar with this immediate hit, though its live energy is something that you need to experience for yourself. During this song, Mendes becomes an infectious musician, holding the audience in the palm in his hand.

Giving his fans a taste of some old tunes and covers, Mendes wrote two medleys for this performance, with the first including “I Don’t Even Know Your Name,” “Aftertaste,” “Kid in Love,” and “I Want You Back,” by The Jackson 5. Beautifully done, every song glides well into the next, giving fans a nice sampling of the songs if they haven’t heard them before, or they want to revisit them.

“Three Empty Words” was offered as an instant download during the promotional period for Illuminate, and is a nice acoustic Ed Sheeran like tune that highlights not only Mendes writing skills, but also his voice and his ability to write simple tracks that resonate with people. One of the more popular songs off the record, the strings that accompany “Three Empty Words” add a beautiful, almost soaring feeling to the atmosphere throughout the venue.

At the end of the end of the show, Mendes introduces a second medley of his original song “Never Be Alone” and “Hey There Delilah” by the Plain White’s T’s. Perhaps, the most breathtaking moment of this performance is the acoustic guitar heard in time to the crowd singing along, who are just as enthusiastic as Mendes’ is.

Ending with the radio hit “Stitches,” the releases only downfall is the absence of several songs on the set list, though it leaves fans satisfied nonetheless. While Mendes is still young with plenty of growth and change ahead of him, we are excited to see where his career takes him in the years to come. We hope that he never loses his unique connection with not only his music, but also his fans.

Listen to “Treat You Better” live below.