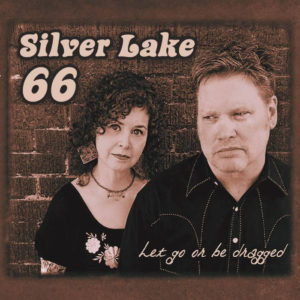 With Portland, Oregon becoming known as a music town, its latest Americana act Silver Lake 66 has released their debut LP titled Let Go or Be Dragged, a record full of tight harmonies and a few memorable moments, though it tends to move along with a slow pace that brings down the bands momentum. Opening with the track “Bury My Bones in Arkansas,” the album’s opening track demonstrates the duo’s talents as guitarist Jeff Overbo convinces us that he has the chops to make it as a professional musician. Vocalist and percussionist Maria Francis is inviting as well, creating an atmosphere that we love for the groups low-key sound and style.

“Treat Me So Fine,” introduces us to the bands possible southern roots, though Silver Lake 66 is based out of a rainy West Coast city. With a foot stomping chorus and simple guitar chords, the songs calm personality will go over well with dedicated Americana and blues enthusiasts, but everyone else will find something missing, which is unfortunate considering that Silver Lake 66 sounds committed to their craft and their chosen style.

Tracks such as “San Francisco Angel,” are much more upbeat and peppy, and while San Francisco can often feel like a gloomy and cold city, the track makes it out to feel like San Francisco has an abundance of sun, and after hearing the glistening guitar licks, we get a picture of the city that we don’t normally see. “Don’t Tell Me Blue,” also gives us a cheery feeling, and while Be Dragged…doesn’t provide their audience much in the way of happy mid-paced tunes, this is the strongest asset on the record and is the type of song that the duo should start write more of.

Closing out is “Doctor,” another slow tune that wraps up the record well. While there are some flaws regarding the time signature on this Portland bands first release, this thankfully is overshadowed by their talent, making them an asset to Portland’s local scene and on a national level as well.

Listen to “San Francisco Angel” below.