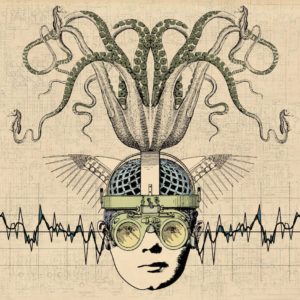 Releasing their debut album Maps of Non-Existent Places in 2014, New Jersey progressive rock band Thank You Scientist have just released its follow up titled Stranger Heads Prevail, an album that is long and ambitious, but nonetheless exciting. While showing off their skills, each member tries to bring as much of themselves into the record as possible, making the LP feel like it’s one long jam session.

Opening with “Prologue: A Faint Applause,” this introduction is one of the shortest tracks on the album incorporating rock and jazz, giving the release its flavor and vivacious that the bands audience cannot ignore. On this song, front man and vocalist Salvatore Marrano stretches his vocals chords, sounding a bit like Davey Havok from AFI, making the group’s latest work sound more like an art piece than a musical work.

Songs such as “Caverns” are much in the same style as the opening track, and while the music at this point feels like it would only appeal to someone looking for bands working outside of the box, Thank You Scientist do an excellent job at getting across exactly what their sound and style is, allowing the music to take its natural course. While the record does sound somewhat repetitive in style, we still never quite know where Stranger Heads Prevail will go next.

On “Blue Automatic” each member stretches the limits of their musical strengths with bassist Cody McCory and drummer Odin Alvarez standing out from the rest of band. It’s clear on “Blue” that each member takes a lot of time to perfect their abilities, demonstrating a talent that is pure.

“The Amateur Arsonist’s Handbook” is another track soaked in horns and driving guitar licks, creating an atmosphere where the audience can become drowned in sound. When listening, we wonder what the band would come up with during a jam session and exactly what the process was like during writing for Prevail.

With creativity abounding, Stranger Heads Prevail is a record that feels untouchable with listeners wanting to dissect every aspect of it, curious to know it’s inspiration. Thank You Scientist have crafted a records that their fans will drool over, while everyone else appreciates that the band has stepped up to perform music that is different and unlike the norm.

Listen to the track “Caverns” below.