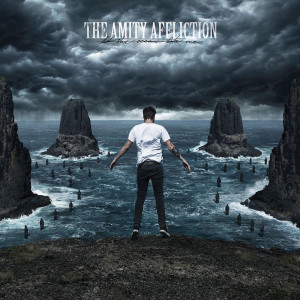 The Amity Affliction has released a great record with Let The Ocean Take Me. The band who is from Gympie, Australia could be considered late bloomers to the music business. Formed in 2003 while the members were in their last year of high school, they released several EP’s before releasing their debut album Severed Ties in 2008, Youngbloods in 2010, and Chasing Ghosts in 2012. While they did not receive much recognition until their third album, if this is your introduction to The Amity Affliction than forgetting about them will prove difficult. On Let The Ocean Take Me, the band tries their best to make the album sound as big and explosive as possible, and with the exception of some softer parts throughout the album, the record doesn’t let up and you will still be having an adrenaline rush long after it ends.

The opening track titled “Pittsburgh” opens with a quiet intro made up of synths, and while it may bring you to a calming state, the band launches into a killer track that has all of the elements of metalcore (screams, heavy guitars, and double bass drums) that make the genre so popular. Vocalists Ahren Stringer, who also plays bass guitar, and Joel Birch, who provides screaming vocals which are a central focus in the music, have worked on their vocals to make sure that they are clear while conveying the emotion behind their songs. The children’s choir towards the end of the song adds an interesting dynamic to the track, as it brings a lighter ambience to the music, while making the song sound fuller. Drawing on his personal experience of nearly dying from extreme dehydration on the 2013 Warped Tour, Birch writes relatable lyrics that many fans can relate to very closely. The lyrics on Let The Ocean Take Me are some of the best lyrics the band have written to date. Lyrics such as “It’s like there’s cancer in my blood/It’s like there’s water in my lungs/And I can’t take another step, Please tell me I am not undone/It’s like there’s fire in my skin/And I’m drowning from within/I can’t take another breath/Please tell me I am not undone” from “Pittsburgh”, has resonated deeply with fans who can relate to Birch’s struggles with depression and anxiety, as the fans have responded positively to the song.

“The Weigh Down” is another stellar tune that opens with a piano that has the same opening effect as “Pittsburgh.” Once you think the band is about to try something different with their music, they go back to the screams and double bass drums that they love so much. The added strings to the track make the song a much more emotional one, as Joel alludes to his experiences of battling depression. “My Father’s Son” is also another stand out track. While it is not known if the song’s lyrics, which focus on not following in your father’s footsteps due to past problems with alcohol are autobiographical, it certainly will have many fans once again relating to the songs message and shows that The Amity Affliction extends their musical creativity to their lyrics.

Songs like “Forest Fire” is the track that brings in more a musical feel to the album. Opening the track with an easygoing intro with guitarists Dan Brown and Troy Brady, and vocals from Joel, this is a tune that sounds the most like alternative rock, and is a song that fans of that genre would most likely gravitate towards due to its much lighter sound. It isn’t quite as jarring as the other songs, and it points the band in a slightly different direction playing more pop inspired music, something that we could hear more of in the bands future songs. “Give It All” is Let The Ocean Take Me’s closing track, and while the band has brought other influences to the albums diverse sound, while doing so in a subtle manner, on “Give It All” The Amity Affliction goes out with a bang. Playing hard is what the band does best, and each song is a reminder that The Amity Affliction are here to stay, and that they will continue to burn bright in the memory of anyone who is a newcomer to the groups music.