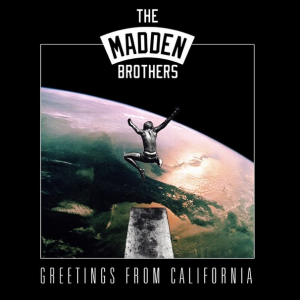 Benji and Joel Madden have always been good at writing catchy songs, while also differentiating the style of their music so neither the listener or themselves become bored. The twin brothers who are from Maryland began playing music together nineteen years ago at the age of fifteen, when they formed their first band called Good Charlotte. While Good Charlotte would go onto to achieve international fame, they haven’t been the most relevant band over the past few years. While their star has dimmed over the past decade, the ability to craft songs with different sounds and styles has always been a strength of the brothers, as every Good Charlotte album has sounded different with each release. After going on hiatus in 2011, they released their last album with Good Charlotte, called Cardiology that same year, and now Benji and Joel are back performing music as The Madden Brothers. Their new album Greetings From California is a laid back, relax in the sun type of album, though it has enough weepiness to connect with the listener, a strength of their previous releases.

The new record functions as two separate albums as it has two sides. While each set of music is not dramatically different from each other, the emotions heard throughout each side slightly differ. Greetings From California opens with “Dear Jane-Intro” in which we hear the turn of a radio dial and once the dial “lands” on the correct station, “Dear Jane” begins. The track has a much sunnier pop feel than early Good Charlotte tracks, but the twins have always been okay with letting their listeners know the details of their lives without prying to deeply, and judging from “Dear Jane’s” direction, the brothers are happy with the outcome on where their lives and music are heading. While they experienced some self-doubt while recording California, due to not being “the next hot thing”, “Dear Jane” exudes confidence as they glide from one verse to another effortlessly.

“We Are Done” is up next, and judging from the lukewarm response it got from Good Charlotte’s critics when the Madden’s released the track as a single, it didn’t look like the song would be a good choice for a single. The song certainly has a simplified vibe throughout the track, and the brother’s trademark harmonies are still intact, along with the background vocals which adds a spice not heard in the brother’s past recording efforts. While the twins musical relevance was questioned, after given this record a full listen, critics will soon realize that there are a few gems to be heard. “Brother” which appears on the second half of the record, we hear Benji singing with his raspy voice along with an acoustic guitar. As he sings along with Joel to offer a trademark Madden Brothers chorus, fans in their twenties are gently reminded of why they loved Good Charlotte during their brief worldwide fame in 2004, with the hit song “Lifestyles of the Rich and Famous” off of the album The Young and the Hopeless, which included a chorus that was forever stuck in your head.

“Empty Spirits” closes out the record and it is easily the most memorable track on the album. Once again, we hear both brothers singing while being accompanied by an acoustic guitar, reminiscing about meeting a girl and remembering the song associated with their encounter. The short and simple tune is exactly what music should be: memorable, nostalgic, and emotionally stirring.

While Good Charlotte’s sixth album is still unconfirmed, The Madden Brothers have plenty of life left in them with Greetings From California and beyond.