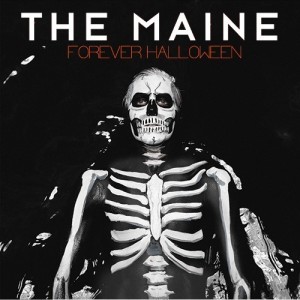 Listen Here Reviews did a review on Forever Halloween when it first came out in 2013. You can read that review here. A new review discussing the new tracks on the deluxe edition can be read below.

Arizona rock band The Maine have always been a fantastic group, and they have plenty of great songs to show for it. While their first two records Can’t Stop, Won’t Stop, released in 2008, and Black and White released in 2010 were great pop punk records, the band seemed to struggle with finding their authentic selves as a group, since they are influenced by The Rolling Stones and Neil Young, two artists whose influence you could not identify in The Maine’s earlier music. 2011 would change all that. That year they released Pioneer, a record that sounded rough around the edges and much more genuine. The band was finally making the music they felt comfortable making, and while they would end up leaving their record label Warner Brothers shortly before the album’s release, the band couldn’t be happier. Forever Halloween, which was released in 2013, took on the same rough feel that Pioneer did. Recorded completely on tape and in a live environment, Forever Halloween demonstrated that The Maine were finally comfortable in their own skin. One year after its release the band has rereleased Forever Halloween to include five new tracks.

While each album has great songs, it is the B sides that the group releases that truly show their experimental side and where they could possibly go in the future. Experimenting with different guitar tones as well as Grateful Dead style jams is what you find on the Forever Halloween deluxe album, and not only does this show their musicianship, but it shows the range of their musicality. The first track “So Criminal” is a tune about a girl named Christina, and while it is unknown if she is based on a real person, it shows that while the band likes to play older sounding music, they are still young enough to still be singing about a relationship going bad, as all of the band members are in their early to mid twenties. Stylistically, the song doesn’t really set itself apart from the rest of the album. The guitar riffs take on more of a simplistic approach, with the tune sounding a bit like “Run” on Forever Halloween’s first edition. Vocalist John O’Callaghan sounds very raw on this track, and while his usually nasally voice may not be everyone’s cup of tea, his sense of melody as he sings the chorus and screams out “Christina, please don’t call here anymore/Oh, it’s me, not you/I only did it because I wanted to” is the one opportunity where we really get a chance to hear John scream and still sound melodic at the same time. The rest of the band which features Kennedy Brock (guitar), Jared Monaco (guitar), Garrett Nicholson (bass) and Pat Kirch (drums) give it their all on “So Criminal”, coming out in full force making the song sound like a bomb ready to go off as they transition from softer verses to an explosive chorus.

“Vanilla”, while not necessarily a weak song, doesn’t have the same fiery feeling the rest of the songs have until almost halfway through. If you are fan looking for an energetic song to crank on your stereo, you won’t be happy with “Vanilla.” The only other complaint about the song is that John’s voice doesn’t sound as strong as the rest of Forever Halloween, and its overall structure is not anything to write home about. Though as usual when coming back from a weaker track, the band redeems themselves. “Ugly On The Inside”, the standout song out of the five new tunes, is a song about a girl who is gorgeous on the outside, while being an ugly person on the inside, and it shows the bands great ability to write choruses that will become lodged into your head for a long time to come. Nothing is better than hearing a band nail a chorus, as it makes the rest of the song stand out and become unforgettable. “Bliss” and “Ice Cave”, the last two songs, are also great choices for the deluxe edition as they are both great rock songs that show the bands simple side when writing songs (“Bliss”) and the more psychedelic leanings we hear on “Ice Cave.” There are no fancy bells and whistles on “Bliss”, and the song focuses on obtaining the simple things in life and “buying a ticket to a place that no one can explain” so you can give into the bliss you seek. It is a very simple and straight forward rock track, that while nothing exciting happens on it, the music and energy seem to really envelope the lyrics, along with the vibrant sounding guitar notes and structure.

Lastly, “Ice Cave” is a song that fans have been waiting to hear for a long time. While the song has been a staple in the bands live show for several years, the fans have been requesting to hear a studio version of the tune for awhile. Now that we get to hear the song professionally recorded, it points to a possibly more psychedelic direction for The Maine. Sounding a bit like a Grateful Dead jam with the guitar experimentation, we wonder if this is a new path that the band may go down. The song starts out as a hard hitting rock and roll tune with a lot of dark sounding riffs that don’t have the same happy vibe as previous tracks. While John does not have a large role on “Ice Cave”, his wail half way through is representative of the bands influences, as the groups they listen to probably would have written a song that sounds similar to “Ice Cave.” We have never seen The Maine become this technical with their instruments, and the guitars give off an almost eerie feeling. The questions that fans will be asking is, will The Maine write songs like this for their next album or will they keep them locked up in their musical vault until fans start to request them? Only time will tell.