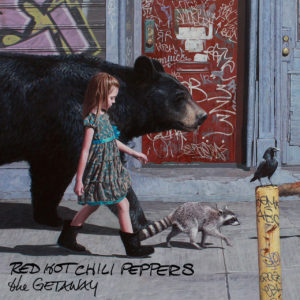 After thirty-three years as a band, The Red Hot Chili Peppers have had a long career writing songs that have set the group apart, due to their twist on rock, punk, and funk music, creating a sound that was new at the time. With their new album The Getaway, it feels like something is missing. Bringing in producer Danger Mouse instead of usual producer Rick Rubin, has changed the Chili Pepper’s sound, while still having moments where the group retains their funk and rock roots. On this release, these moments aren’t quite as noticeable, and if The Getaway is your first time listening to The Red Hot Chili Peppers, you won’t experience the magic of the bands previous sound and what has made them such a special group.

While the lineup has remained unchanged for over twenty years, the departure of longtime guitarist John Frusciante who left the group for the second time in 2009, has made the bands recent material (2011’s I’m With You) feel flat and uninspired.

With front man Anthony Kiedis sounding confident and bassist Flea slapping and plucking his bass in his own unique and intricate style we’ve become accustomed to, the band should be on top of their game, but instead they’ve fallen.

Opening with the album’s title track, we hear a funky hip hop inspired beat from drummer Chad Smith, setting the stage for what could be a great record, but instead of including a hard hitting intro as previously done on past records, “The Getaway” starts off sounding expansive, introducing a different feel then we’ve heard before, as the track heads into a blandness that marks the lowest point in the bands career.

A positive note on this album is how Josh Klinghoffer has come into his own, as he has finally figured out how to fill the big shoes of John Frusciante, who brought the group’s songs to a recognizable status among more fair-weathered music fans.

“Dark Necessities,” The Getaway’s latest single is a track that starts with a few piano notes and Flea’s trademark bass slap that we’ve come to know so well. While nothing remarkable, “Dark Necessities” is by far the most “Chili Peppers” song we get on The Getaway, reminding hardcore fans of the tracks on the bands 2006 double record Stadium Arcadium, and while this cut lacks that LP’s ambitious nature, “Dark Necessities” reminds us that The Chili Peppers have still got what made them stand out in the first place – the ability to create a new sound with the drop of a hat.

Tracks such as “Go Robot” still holds on to the funk style the group plays, but the songs inclusion of synths, which sound reminiscent of Michael Jackson, don’t do much for “Go Robot,” leaving us with the feeling that the record has gone on for longer than it should.

The cut “Encore” is notable for Anthony Kiedies and his vocals, along with Klinghoffer’s dreamy guitar work and hazy synths, the only time throughout the record where this popular 80’s instrument compliments the sounds heard throughout the song.

While Kiedis has been singing in this band for over twenty-five years, his voice has never faltered, making him one of the most recognized and loved singers in rock. Calming throughout, the band can still play well, though their ideas need a bit more fleshing out before releasing them to the world.

Closing The Getaway is “Dreams of a Samurai,” a song that once again makes use of a piano, something we rarely hear in a Chili Peppers track, leading us to wonder if the instrument has found a new home in future tunes. Also introducing bits of reggae, the group has given their fans a new style that they wouldn’t associate with the group.

With this new experimentation in sound, The Red Hot Chili Peppers have changed up their style while also making sure every member shines, and while the music is much simpler on this effort, The Red Hot Chili Peppers are still the same band at their core. Though it does feels like they’ve lost their footing, there’s no doubt that The Getaway will appeal to a new audience, leaving them to discover the Chili Peppers for the rest time, while leaving the rest of us to sit back and reminiscence about what was.

Watch the music video for “Dark Necessities” below.