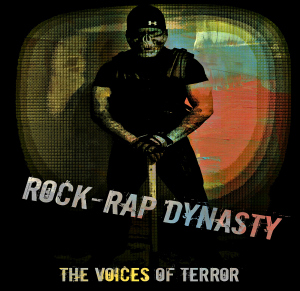 The Voices of Terror are a hard rock and rap group from Deptford, New Jersey, and have released their first full length album Rock-Rap Dynasty, which can be compared to early Papa Roach tracks and Linkin Park as all three bands have a similar style. Members Mike Walker and Zero, both in their early to mid twenties, have talent and a record that has the potential to make them very successful, and take them beyond Bandcamp.

Opening the album with “Warning” the track begins with a harsh sounding guitar accompanied by strings to give the song a wave of emotion. While neither member sings, they make great use of their hip hop influences by providing listeners with a smooth take on rapping, making their rhymes flow with ease, while also making sure that each song has meaning. Next is “I Am The Beast”, a catchy song that uses plenty of effects, and while this could lead some listeners to believe the band wants to sound overproduced, the effects help the band by adding more interesting layers to the song, making it a memorable one. While the group could have easily taken the easy route with a simple drum machine to compliment their rapping skills, the band has made sure that the drums sound like an actual drummer is playing them, making the track have a more musical feel to it. The choir like backing vocals also gives the song an edge without sounding overdone.

Songs such as “Lethal Weapon” have a mechanical sound to them, bringing to the forefront the bands hip hop influences such as Public Enemy. The only complaint with this song is that the guitar tends to get in the way of all of the sounds heard throughout the track, making it the only instrument you can hear well. It would be interesting to hear what the tune would sound like if the guitar was omitted from the song, since it could give it a lighter vibe.

To close out the album we have “Voiceless” which is an instrumental tune that is featured as a bonus track. The band brings together all of the sounds we’ve heard so far on the record into the song, which really makes the track an interesting one to hear as we get a chance to see how far their musical abilities can take them on future releases. The piano heard throughout the song gives the tune a classical vibe to it, while providing a laidback feel. The percussion on this tune is particularly busy, and is filled with bursting creativity. The only negative aspect of the track is where it was placed on the record. Since the song has fresh and new ideas, we are not sure why it is buried at the end, and it could have been a good tune to feature in the middle of the record, as it could have served as a bridge between both the first and second part of the album.

Overall, there is nothing bad to say about The Voices of Terror and their brand of rock influenced rap tunes. While fans can look forward to what is coming next, we hope that the group will continue to branch out and continue to explore new sounds and styles on their next effort.