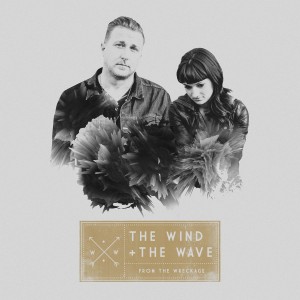 The Wind + The Wave, a country-pop band from Austin, Texas is one of the most promising bands you will come across this year. From The Wreckage, the band’s debut recordis a fresh country album that puts its own spin on country music, with bits of pop music sprinkled throughout, and is devoid of any Nashville influence. The new record, released yesterday, is a solid effort and right from the start we realize that band members Patricia Lynn and Dwight Baker have a musical chemistry that is reminiscent of the Nashville duo The Civil Wars. Formed in 2009, the band mates met at a show that Patricia was performing at with her previous band. Dwight, who was a record producer before joining the group, has worked with musicians such as Brandie Carlile and Austin guitarist Bob Schneider. When Baker’s wife urged him to spend some time outside of his studio, he went to catch Lynn and her band perform, and the musicians decided to form a group after Dwight expressed interest in working with Patricia on several of her own projects. Baker, who describes himself as “the Wind” and Lynn as “the Wave”, says that the two band mates are best friends, which is very apparent throughout Wreckage as the two gel together extremely well on their debut record.

The opening track “My Mama Said Be Careful Where You Lay Your Head” is a foot stomping, sing along track, that sounds very similar to the Civil Wars tune “From This Valley” off of their last album, a self titled release in 2013. Though instead of having the mostly slow and bleak tones of the Nashville duo, The Wind + The Wave have crafted a bright and cheery album that will lift the fogginess from anyone’s cloudy day. Both members play extremely well, and each aspect of the song pulls the listener in with their captivating ability to get you hooked right from the start. Each song also takes on a real approach, as the group has written songs that reflect their lives and what they have gone through. Nothing on From The Wreckage feels forced or cheesy, and the band only has to play one song to get the listener hooked on their breezy brand of country-pop.

“From The Wreckage Build a Home” is the album’s second track, and the inspiration for the album’s title. While it takes on much of the same shape and form as “My Mama…” Lynn’s voice is hauntingly beautiful as she croons about “being built to last” as Dwight strums lightly behind her. The third song “Every Other Sunday Morning” is a slower tune and not nearly as bouncy as previous tracks, though Patricia once again takes center stage, and while we love her voice at this point, there is an odd feeling that Baker is being left in the dust vocally, as Patricia marches ahead with her angelic voice. This leads the listener to believe that the recordsometimes feels like a solo effort, and not that of a duo.

The next track, “The Heart It Beats the Thunder Rolls” takes on a light rock edge that the group has spent much time perfecting. Much like Joy Williams of The Civil Wars, Lynn’s melodic tone really keeps the band together and rolling along, and without her, one might question whether the group could sustain its growing popularity.

The last track on From The Wreckage is “This House Is a Hotel”, is a song about leaving home and making your own decisions. The sweet sounds of the organ, acoustic guitar, and the hand claps that double as the drum beat, creates an almost dreamy song that feels like it really sums up the vibe of the record, by being light and memorable. The only complaint about Wreckage is that Dwight is not featured enough vocally. He is as much a part of the band as Patricia, and it would be a shame to forget that so early on in their growing career.