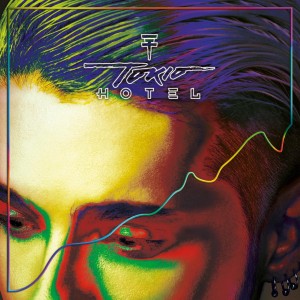 In 2009, German electronic-rock band Tokio Hotel released their breakout album Humanoid, and after almost five years of silence, the band is back with their latest release Kings of Suburbia with an improved sound while still sticking to the electronic influenced music that made them so popular. Tokio Hotel was formed in 2001 by twin brothers Bill Kaulitz, the bands front man and vocalist, guitarist Tom Kaulitz, drummer Gustav Schafer, and bassist Georg Listing. They have released five albums including Shrei (2001), Zimmer 483 (2007), Scream (2007), and Humanoid in 2009. Shrei and Zimmer 483 are both sung in German.

The album begins with “Feel It All” and we are hit with the familiarity of the bands electronic style, which ends up working well for at least some of the time. Singer Bill Kaulitz sings with heavy auto tune to accompany his voice, and the band plays well despite the songs heavy production. The song sounds like something you would hear in a dance club as the beat bounces out of the speakers, and Kaulitz’s nasally vocal tone pulls you into the song. Overall, as an opening song it lacks the punch needed to keep people interested, but if you’ve been a fan of the band since Humanoid, you won’t have any problem liking the tune. “Love Who Loves You Back”, the albums strongest cut and lead single, is a catchy track that has the kind of sound that will dominate radio for quite some time. Still keeping with their slick electronic stylings, it feels like the band has taken influence from British band The 1975, who also use electronic elements in their songs. The chorus is one that you can’t resist singing along with, and the songs relaxed beat is subtle enough to not sound too pulsing. The track is a busy one as it experiments with different sounds, though it all flows together seamlessly well, and it is the standout song on Tokio Hotel’s comeback album.

“Girl Got a Gun” is one song that should have never made the cut for the album, mostly for its lack of focus and mediocre performance. The auto tune is put into full force here and everything sounds pieced together as if the song was written right at the album’s deadline. Bill’s repetitive vocal style in the chorus as he sings “girls got a gun” makes listening to the song a chore, since Bill has demonstrated on the records previous songs that he can sing well. Nothing about the song is memorable, and after listening to great tunes such as “Love Who Loves You Back”, why “Girl Got a Gun” is on the album is a mystery.

“Dancing in the Dark” is another track that picks up where “Girl Got a Gun” fell apart. The computerized sounds featured on Kings of Suburbia tend to mask the bands playing abilities, while “Dancing…” illustrates that Tokio Hotel can in fact play their instruments, and it is a song that we can take seriously. Every part of the song is incredibly catchy and memorable, while reminding longtime fans why the band became known in the first place.

Kings of Suburbia ends with “Great Day” a fairly boring track that was a poor choice for an album closer. Sounding very generic, the tune tends to drag, and while the song starts to pick up the pace when the chorus begins, the same could not be said for the rest of the track. While the album does not end well, Tokio Hotel’s latest album does have its moments, though they tend to get lost in the shuffle. Kings of Suburbia is out now.