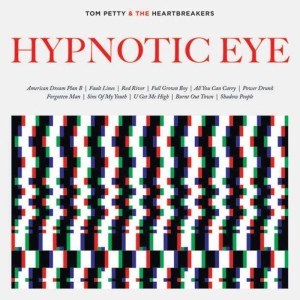 Tom Petty is fantastic at playing memorable rock and roll and on Hypnotic Eye it only gets better.There is nothing fancy about Eye, and Tom Petty obviously wants it that way, as the album is a great introduction to the bands past material as well as where they will be in the future. Tom Petty formed The Heartbreakers in 1976 in Gainesville, Florida. The band would go on to release thirteen albums including a self titled album in 1976, Damn The Torpedoes (1979), Southern Accents (1985), and Mojo in 2010.

When comparing Hypnotic Eye to previous Heartbreakers’ records, it sounds the most reminiscent of the group’s first two albums, with its simplistic rock and roll vibe, and thankfully for Petty, going back to the band’s roots keeps their current music sounding fresh and progressive, making it appeal to the younger generation who were not around when Petty first stepped into the studio. The record opens with “American Dream Plan B”, and for many older fans the track will sound like they are stepping into a time machine, as if they are heading back to the band’s first record. The song takes on a garage band feel on this track, and the simplicity is what makes the song a great opener, as Petty has always strived to write great rock and roll tunes. The only difference between the first two records is the passage of time. While their self titled album showed their aspirations to be a great band, Hypnotic Eye really embodies this goal. Thirty eight years later, the riffs are tighter and Tom’s vocals still have the same wispy and nasally quality that they did three decades ago, and Hypnotic Eye demonstrates that the band knows their stuff, and that they will be one of the few rock groups to be playing until they die. The record continues with “Fault Lines”, and the tune opens with drummer Steve Ferrone pounding out a beat on the cymbal bell, with Tom and lead guitarist Mike Campbell interchanging guitar riffs that sound tough and grinding, almost like the band is at a long jam session and “Fault Lines” is what came out of it.

“Forgotten Man” opens with a crisp guitar riff that has an in your face attitude, and while being simple in composition, there are moments where the group really shows their skill, and the guitar riffs that is almost at the two minute mark is pure rock and roll, played with an attitude that only the very seasoned know how to master as some would argue that they learned how to play music from some of rock and roll’s best bands, such as The Beatles, setting a template to how rock and roll should sound.

To close out the record we have “Shadow People”, which is the longest tune on Hypnotic Eye. Functioning as a slower jam, the song feels like it was placed at the very end, to give fans an idea as to where the band is going next. Tom Petty is not retiring any time soon and his creativity isn’t running out. While many of his older peers in music oftentimes release records that indicate that their creativity is growing stale, The Heartbreakers still sound fresh and vibrant nearly forty years after their formation. The record illustrates the bands excitement over their new music, and Hypnotic Eye will get fans excited about Tom Petty’s music for a long time to come.