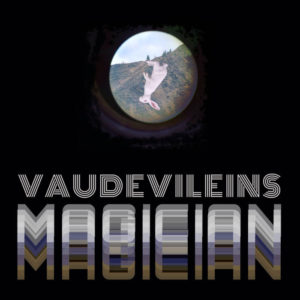 Chicago rock band Vaudevileins has released their new album Magician, and from start to finish, it’s a special record. Coming out of a strong music scene, Vaudevileins know how to engage their listeners from beginning to end. Opening with “Sea Anemone,” the group starts their latest release with a hard-hitting track that demonstrates their strengths as musicians. Backed by Kickstarter supporters to fund the making of the record, Magician doesn’t mess around, as you get the sense that the band wanted to make the best album possible not only for their backers, but for everyone else too.

“Chasing Time,” is an energetic track that is sure to get the crowd dancing and coming back to see the band at their next show. With guitarist Jeff Julian and Evan Mohler on guitar and vocals, fans are introduced to strong melodies and harmonies that are consistent throughout Magician, making it one of the strongest assets of the LP. “Fake Cigarette” introduces us to bassist Bill Aldridge and his foundation like basslines, by helping to glue the song together with his funky grooves that make you feel the track’s pulse. While “Fake Cigarette” isn’t as in-your-face as the rest of the songs, it keeps with Magician’s rock sound.

“38-54-16” is a song that feels huge and at times a bit abrasive compared to the rest of the cuts on the album, and while its complex drum part drives the tune, what stands out the most is Julian’s vocals, as he comes across as the driving force behind each number.

Magician closes with “Devils,” a punchy tune that wants to make sure that everyone is listening and with the guitar riffs on full blast, it is by far the darkest song on the record, followed by a haunting acoustic part that ends the song on a quieter note, though no less effective in having “Devils” stay with you.

Vaudevileins have written a strong release full of songs that have plenty of heart and direction, not only making themselves a strong band in the Chicago scene, but one that is memorable to everyone who listens, reminding them that they can find hidden musical diamonds in nearly every large city with a music scene.

Listen to the opening track “Sea Anemone” below.