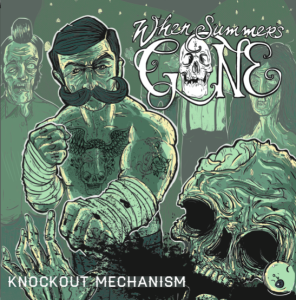 When Summer’s Gone is a hard and rollicking band that packs a lot of passion and punch into thirty-six minutes. Hailing from the small town of New Castle, Pennsylvania, the group began as a studio project in 2008, which lead the group to release their first album December in 2009.The band has also released two EP’s entitled Matinee and a self titled EP in 2012. While the band has drawn comparisons with Alice in Chains, Stone Sour, and Sevendust, When Summer’s Gone have their own sound entirely, and it is especially apparent on their newest release Knockout Mechanism. The opening track “After All” is a biting tune that features punchy and dirty guitars that completely slay throughout the song. The band features guitarists Dave Graziani on rhythm guitar and lead vocals, along with AJK on lead guitar and backing vocals. Both musicians play incredibly well together, and their tight and blazing guitar riffs really give the band the edge they need to stand out. While the guitars are certainly a powerful force, the vocals from Graziani tend to throw the song off slightly, since his vocals aren’t very strong for the music they are making, as well as his voice not being able to portray the attitude the music wants to have. Tracks such as “Like Ghosts” make Knockout Mechanism rough around the edges and brings in the obvious Alice in Chains inspiration with the grunge sounding guitars. The song flows incredibly well, though the band does not really mess with different sounds or time signatures throughout the record, making it slightly repetitive for anyone who is not a regular listener of the hard rock genre.

“We All Fall Down” is the records sixth track and as it chugs along with boundless energy, it is apparent that the group is not into playing music for the money, as the album gives off the feeling that the band is playing music for the enjoyment of performing. On this song, it feels like Graziani has finally found his voice, as it matches up precisely with the bands energy and no longer feels like it is lagging behind. Knockout Mechanism’s closing song “Reborn” has an intro that builds as the song opens and it’s somewhat eerie sounding start is different than anything we have heard on the album so far. While this kind of opening intro would work for this kind of band, it’s a bit of a letdown that they stuck the track at the very end, as it doesn’t sound as energetic as previous songs, and trying to present a different angle to the band’s music this late in the album feels a bit awkward. As we are used to hearing the band explode on their songs, it feels like on “Reborn” we are listening to an entirely different group.

Knockout Mechanism, with the exception of the last song, is a record that will be a hit with hard rock fans that are looking for some nostalgia, particularly for the days of the original Alice in Chains lineup and the glory days of grunge. Even though When Summer’s Gone have released their music many years after grunge music was popular, they certainly are bringing it back by putting their own stamp on it, and thankfully it makes for a great record.