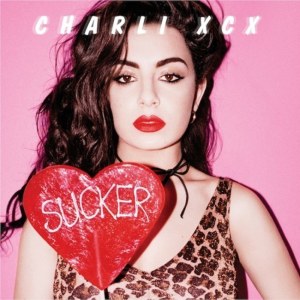 When we listen to Charli XCX’s new album Sucker, there is no denying that she can write a solid pop song, and on her latest record this could not be more true, though we question how long her fame and popularity will last. While we have posed this question with many musicians in the past and present, Sucker could be labeled as an album that is highly disposable, despite the records critical acclaim that it has achieved even before its release date. Charli XCX was born Charlotte Emma Aitchison, and was born and raised in Cambridge, England. She released her debut album 14, in 2008 though it was never commercially released. She released her second album True Romance in 2013, leading her to experience modest commercial success throughout various countries.

The album opens with the records title track, a sweet and sugary song that sets up the picture that Charli wants to paint with her sound. Sounding heavily influenced by the 90’s pop explosion, “Sucker” is a highly catchy tune that sounds like it has a good chance of being placed into heavy rotation on a Top 40 radio station. Aside from its glistening presence, nothing about the track ultimately stands out, though its catchy and bouncy sound will keep fans ears glued to their iTunes libraries and Spotify playlists, as they listen to Charli flow gracefully from one track to the next.  “London Queen” keeps Sucker and its occasional memorable moments moving along, as the song is by the strongest cut on the record. The track focuses on her British roots and how she never thought she would be living across the pond, but in order to pursue her dreams she must make sacrifices.

“Boom Clap” is the song that has been dominating Top 40 radio for the past several months, and it is a tune that entices listeners to sing along with its irresistible chorus. The overdubbed and almost childlike sounding vocals in “Boom Clap’s” chorus is notable as it sticks in your head making it impossible to forget. While “Boom Clap” has a very minimal feel to it, it demonstrates that she can sing, something that is often lost on pop records that have the slick feel that Sucker does. “Body of My Own” sounds like it was taken straight out of the 80’s, and if you didn’t know it was Charli XCX singing, you probably would end up thinking you were listening to an 80’s one hit wonder. While the song doesn’t grab listeners like “London Queen” does, Charli shows her fans where her musical inspirations come from with the tune’s vibe, making her seem more authentic than other singers today who perform the same style of pop music that she does.

Charli XCX closes out Sucker with “Need Ur Luv” a catchy pop tune that has a distinct sound that sets itself apart from the other tracks on the record. With a lazy, jazz like drum pattern, the song offers a more relaxed and laidback feel than the albums previous offerings, and once again shows that Charli is actually a talented vocalist. While her vocal ability comes to the surface on Sucker, Charli may want to try experimenting with her songs to make them have more of an edge while still maintaining a pop feel, in order to ensure her longevity beyond the popularity of songs like “Boom Clap.”