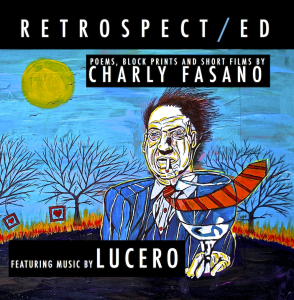 Retrospect/ed is a multimedia book and 7 inch EP featuring two spoken word tracks narrated by Charly Fasano, an artist and poet from Colorado, as well as music written by Tennessee rock band Lucero. Retrospect/ed is a reunion for the two parties as this album is the second time Fasano and Lucero have teamed up. They recorded a spoken word EP in 2008 during an ice storm and released it as a limited 7 inch pressing. Retrospect/ed’s release will also include a hand blocked print as well as an mp3 code with bonus tracks of Lucero and Fasano’s first EP.

The music for Retrospect/ed compliments the storyline well, as the EP’s two tracks focus on memories from two different age perspectives-one in childhood and one in old age. The opening track “Gasoline Fumes” focuses on what it is like to be a kid traveling around America in the back of your families van. As the track plays, Charly takes us back to the early 1980’s as the Fasano family heads on a road trip to Tulsa, Oklahoma to visit their Aunt Daisy. As Charly recounts their road trip, Lucero is heard in the background playing calming background music as they set the mood for Charly’s memories. Lucero members Brian Venable on guitar and Rick Steff’s organ playing gives the song a nice backdrop where we can really focus on Fasano’s words and really visualize the images of Fasano being a young child trying to make a road trip entertaining. While he obviously tried to make the best of his road trip experience then, now as an adult it feels like he has fond memories of his trips on the road that he will remember forever.

“Teddy’s Bowling Alley” is the EP’s next song and this time we are no longer listening to a story about childhood memories, but an elderly man who does not want to let go of his past, as the bowling alley that he worked at since childhood is about to be demolished. As Fasano talks about the old man spending a lifetime in the bowling alley, Lucero compliments the spoken word song with music that sounds like something straight out of a movie soundtrack as well as the organ really setting the mood for the track and giving it a nostalgic sound. The organ accents in this particular tune really highlights the music and gives the song an added punch, since without it, it would be in danger of sounding to boring.

The third song “Memphis” is featured on Fasano’s and Lucero’s first EP and is placed on Restropect/ed as a bonus track. The tune has more of a rock and roll feel to it, as Lucero guitarist Brian Venable bends his guitar strings to pull the listener into the music, while eventually heading into rock and roll territory as the instruments start to become heavier. Retrospect/ed’s last and final track is “New Year 2005” (also a bonus track from the first EP) and it is the lightest sounding song on the album, as Venable strums his guitar in a carefree fashion, leading the track to have more of a country vibe. The only complaint is that at different points throughout the song, the music tends to drown out Fasano’s voice, making his voice seem slightly inaudible at times.

While the album’s engineering could have been a little bit more balanced for the bonus songs so we could really hear every aspect of the record, Charly’s poems and experiences are interesting ones as we really get to peak into his mind.

Retrospect/ed will be released on September 29th through Fast Geek Press and Charly Fasano’s Bandcamp page.