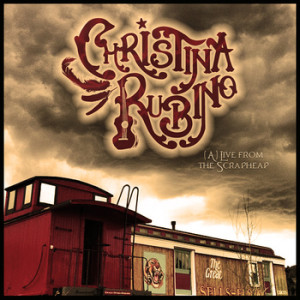 On her new album Alive From The Scrapheap, upcoming New York folk singer Christina Rubino brings a bold and emotional delivery to her music, and hopefully it will not be her last. On Alive From The Scrapheap, Rubino treats us to her beautiful and strong voice while playing acoustic guitar on all of the tracks. Her ability to reach lower notes gives her music a different edge than other female vocalists today. Inspired to play music at the age of eighteen after she heard the chorus of “Piece of My Heart” by Janis Joplin, she joined several bands including a Depeche Mode cover band called Violator which saw some success. Despite enjoying the camaraderie and travel that comes with being in a band, Christina longed to strike out on her own. Not everything would work out well however. Christina eventually became an alcoholic, which is a period in her life which she sings about with enormous honesty on Scrapheap.

The album’s opening track “The Gateway” features Christina playing a song that sounds more country than folk, though the element that bridges the two together is the inclusion of the harmonica which adds a lighter feel to the track. “Winds of Change” has a darker feel, possibly reflecting on her time trying to get sober. Her emotional delivery both musically and lyrically, allows listeners to feel the pain of her past without sounding like she is trying to make her audience feel sorry for her. “Sticks and Stones” is a more carefree song sound wise, though the lyrics focus on talking about someone behind their back. The songs light percussion part keeps the song from becoming too boring for those fans that do not enjoy folk music as a whole. The last song on the album “Billy’s Song” is the records worst tune. Sounding tired and worn out, Christina sounds like she is just trying to get through the song and nothing more. While Christina has strong abilities on the songwriting and singing front, her guitar playing throughout the album sounds very average and simple, and it would be great to see Christina focus on making her guitar playing stand out more on any new music that she writes.

While her main influence for writing music was Janis Joplin, it’s interesting that she didn’t give a more explosive and emotional vocal performance, especially since her music talks about going through rough times. In Rubino’s biography, she says that she remembers wanting to sound like she is “exploding”, much like Janis Joplin did on “Piece of My Heart”, and on Alive From The Scrapheap, we see none of that. Christina’s music has a large chance of appealing to everyone as her music has a very wide reach which will extend beyond folk music fans. Alive From The Scrapheap is an album to listen to again and again.