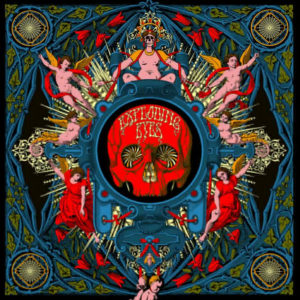 Dublin, Ireland has a fiery rock band on its hands. Named Exploding Eyes, the psychedelic-rock group has released their self-titled debut album with ten tracks that will remind listeners of the crunchiness and aggressive wailing of The Black Keys and The Darkness. Opening with “We Need Love,” the record starts off on a high note, setting up the pace and tone for the album, showing off guitarist Al Dodd’s razor sharp playing abilities. Released on Big Neck Records in the United States, it’s obvious after listening that the group is ready to get out of Ireland and share their music with the world.

“Levitate” provides more of a Creedence Clearwater Revival vibe while keeping with the psychedelic hard rock sound of “We Need Love.” While not as forceful sounding, the slower timing breaks up the LP’s chunkiness, giving it a melodic feel, a characteristic that is mostly absent from the LP.

“Play Dead” is a catchy jam that lodges the opening guitar lick in your head straight away, and is one that beginning guitar players will want to learn the first time they pick up the instrument. Harmoniously infectious “Play Dead” stands out as a hit to watch for in the indie rock scene.

“It’s Alright,” the grooviest track on the record, is placed at the very end, and its bass line which aligns with the drums, makes it the highlight of the record, bringing up the question of why the band decided to bury this song amongst the others.

Bringing back the psychedelic freshness that works so well for Exploding Eyes on “It’s Alright,” a notable aspect is that it ties the record together, reminding their audience of their overall sound. While they don’t stray from their roots much throughout their debut, Exploding Eyes are a convincing act that have plenty to offer audiences abroad and at home.

Listen to “We Need Love” below.