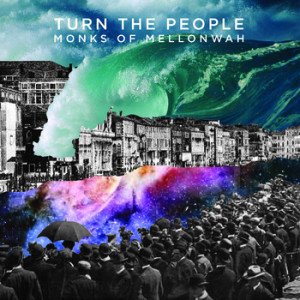 Turn The People, the debut album from Sydney, Australia alternative rock band Monks of Mellonwah are one of the better rock bands in the alternative music scene today. While they have drawn comparisons to Muse and the Red Hot Chili Peppers with their sharp and edgy songs, it is Incubus that they resemble the most, while adding in hints of others influences such as Muse. Forming in 2009, members Vikram Kaushik (vocals), Joe and John De La Hoyde (guitar and bass), and Josh Baissari (drums) formed the band over a shared love of live performing. They have released three EP’s called Stars Are Out (2010), Kyoto (2011), and Neurogensis in 2012.

On the first complete track on Turn The People called “Ghost Stories”, we hear the band play a very minimalist sounding intro as Vikram pulls their audience into the song with his powerful and emotive voice. While the song largely sounds like a generic pop track, the band surprises listeners by putting in an outro that sounds very influenced by metal, with a blazing hot riff that shows the depth of the bands overall skill. By putting these little surprises into their songs, it shows the bands creativity and that they don’t want to pigeonhole themselves into one genre.

Tracks such as “Alive For a Minute” starts out with a driving bassline and backbeat with hints of strings bringing a comparison of the band Muse. The song would be really boring if it weren’t for the introduction of strings on the track, along with metal style riffs. “Escaping Alcatraz” is a lively song that is one of the best on the album. The strings and the bands energy make the song pop and bounce out of the speakers which is something that has been largely absent up until this point. “Escaping Alcatraz” has a sound that really surrounds you as a listener, and would sound great live as an opener to the bands set as its energetic punch is something that you won’t forget.  “I Belong To You” one of the last songs on the record, is an acoustic song that is an emotional ballad which changes the tone of the album musically. While the rest of the album is musically heavy with a bit of edge, “I Belong To You” is just Vikram’s voice and John on acoustic guitar, and the emotions expressed are heavy as the narrator longs to be closer to someone. The bands willingness to strip down and go entirely acoustic is good, as it shows a different dimension to their music for those who felt that Monks of Mellonwha were just another clone of Incubus and Muse.

While Monks of Mellonwha has already garnered international praise from California to their homeland of Australia, Turn The People is the next step in getting more international recognition, and after a few listens, you will realize that they wholeheartedly deserve it.

2 comments to “Monks of Mellonwah: Turn The People”