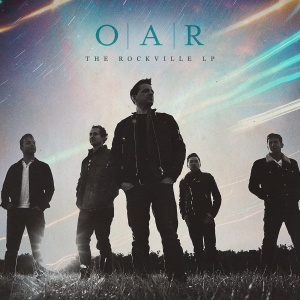 The Rockville LP, by Maryland rock band OAR (Of A Revolution) feels like home when you listen to it. The album, named after their hometown of Rockville, is a tribute to their hometown and the memories and people that they have left behind over the past seventeen years of being in a band. To celebrate the album’s release, the band has released a five part series documenting the entire group going back to Rockville and rediscovering their roots. In each video, we see the band going back to their high school, visiting their childhood homes (which includes an interview with front man Mark Roberge’s mother), and visiting Black Hill State Park where the band would hang out in their early days. When watching the mini documentary, fans will revel in the places that they knew the names of, but never knew exactly what they were, and anyone just discovering the band will be surprised by the down to earth feeling of the movie as the band succeeds at making themselves look normal, even though their career is not. As the band continues to travel the world, Rockville will always be the place the band calls home, and after listening to The Rockville LP, fans will be reminded of where their home is as well.

Over the bands nearly twenty year history, the band has released seven studio albums, five live albums, and one EP. While many bands coming up in the late 90’s normally gained recognition by signing to a major label, OAR decided to do things a little differently. Relying completely on word of mouth, the band would play wherever they were allowed to and gained a massive following among the college crowd. Eventually the hard work and persistence would pay off as their third album Risen (2001), debuted at eleven on the Billboard Charts.

“Two Hands Up” Rockville’s opening track, has a reggae feeling to it, along with the bands typical pop stylings. While the song is a catchy one, it really isn’t single material and doesn’t have the sentimental feel that other songs on the album do. While everyone in the group has been playing music for a long time, it’s good to hear that everyone is still feeling the music that they perform and that everyone is still enjoying the songs and each other. “We’ll Pick Up Where We Left Off” gets to the heart of the record and the bands mini-series. Front man Marc Roeberge said about the song and several others in the mini-series, “they were written in a basement, just like we wrote our first songs, and they were written in a basement in a scene of that Thanksgiving weekend when everybody comes home, and you haven’t seen anyone in a year or two, or five, maybe more, but you pick up right away. I think we all relate to that and love that. There’s nothing better than that one friend who didn’t ask why you didn’t call.” It’s obvious that the band wants their fans to enjoy the experience of “going home” as much as they do, and that’s what “We’ll Pick Up…” does, as it serves as a soundtrack for nostalgic memories.

“Peace” is one of the albums stand out tracks, and it is the kind of tune where if you don’t like an album as a whole, songs like “Peace” can make up for the rest of the album. Opening with a gorgeous acoustic riff and Mark’s peaceful voice, “Peace” talks about fighting between your significant other, and when Mark sings “I want love, I want us, I want you, I want peace”, you can’t help but sing along to the song’s lyrics, and it will no doubt be popular among the bands fans as the token “hold up the lighter” tune. “The Architect” stays true to its name by building up each part of the song starting with drummer Chris Culos who starts the song by playing a Latin style beat, followed by Jerry DePizzo, the bands saxophone player, who plays short bursts of notes on the saxophone, making the song sound incredibly colorful. The song is the funkiest track on the record, and it is easy to see why the band has become so popular. The band plays incredibly well, and the horn section adds a very spicy addition to the music, which you don’t hear in a lot of rock bands today.

“I Will Find You” the albums closing track, is by the far the longest tune on the album, ending at nine minutes. The song begins with a slower and more drawn out sound, though it picks up about half way through. While it is not something that ultimately stands out when compared to the rest of the record, long time fans of the band will still appreciate it, since the group still sticks to the familiar pop sound that made OAR so popular. OAR’s The Rockville LP is the best album the band has released yet. Old fans will be happy that OAR is back, while new fans will love the nostalgic feel of being home, and now they will have a soundtrack to listen to when they make the trip.