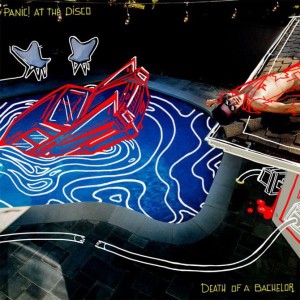 With each record released, Las Vegas rock band Panic! At The Disco have put out an album that sounds drastically different than anything that came before it. When they came onto the scene in 2005 with A Fever You Can’t Sweat Out, the band introduced young music fans to their unique style which intertwined rock and EDM music, which became wildly popular and skyrocketed the group to immediate fame. Since then they have released records more closely resembling the Beatles and 80’s style music then anything heard on the radio. With their new album Death of a Bachelor, the bands only constant member Brendon Urie has released a pop album that at times feels more suited to be sung on a Broadway stage than one shared with other rock bands, though this new direction shouldn’t be taken negatively however, as Bachelor is a record that expands Panic’s! horizons and is ultimately the best release they’ve put out in the past few years.

“Victorious” opens the album and we are hit with a pop track that explodes with the flashy theatre style sound that Panic! likes to experiment with. Right away, we notice just how rich and stunning Urie’s voice has become over the ten years he has been performing with his band. Aside from the strong vocals, the song feels repetitive, though its got some great ideas throughout, including the inclusion of trumpets and overdubbed vocals that make the song sound larger than life.

Tracks such as “Hallelujah” and “LA Devotee” are two tracks that the band used to promote the record and introduce fans to the groups new chapter. Both are bouncy songs that are a mix of the different sounds heard throughout Panic! At The Disco’s career, and while Urie may be going at things alone these days, both cuts convey his confidence perfectly, making both songs strong numbers and immediate fan favorites.

“Impossible Year” closes out Bachelor, and its beautiful piano part with Urie sounding like he’s trying to channel Frank Sinatra, one of his biggest influences, is a perfect ending to a strong album, that is perfect for the fans that expect Brendon to release something ambitious and creative, which is exactly what Death of a Bachelor is. Full of glitz and glamour, Death of A Bachelor won’t be straying from our minds quickly, as Urie has made sure that his newest album under the Panic! At The Disco name is nothing but stylish.

Listen to the track “LA Devotee” below.