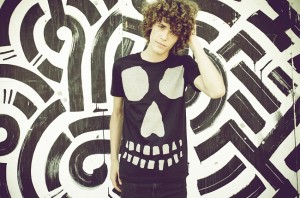 A Little Peace by Oregon’s Trevor Dahl, also known by his stage name Plug In Stereo, is a fresh start to 2014, as he croons about soul mates, relationships, and craving for human connection against an acoustic pop sound that he is exploring for the first time on his latest EP. For those who want an escape from the big pop stars currently dominating the charts, they can turn to Plug In Stereo for a respite. Trevor Dahl, the twenty year old behind Plug In Stereo, writes simple and effortless pop songs that sound damn good.

While he began his music career with just an acoustic guitar and his light soothing vocals, he is now trying out a much fuller sound, consisting of electric guitars, drums, pianos, and guest vocals from Megan and Liz, a sibling duo from Michigan to round out his new sound. Dahl began recording songs in his bedroom at the age of age twelve, and in his teens he began touring with Dashboard Confessional, The Scene Aesthetic, and more. While he has released several EP’s throughout his short career, Trevor is primarily a songwriter, writing songs for a variety of pop artists. Aside from working on songwriting, Dahl released The Acoustic EP late last year, which gave fans a bit of a teaser for his upcoming album, as it featured four songs also on A Little Peace. The first song on the A Little Peace is “To Be Wanted” originally a piano ballad has now been reworked into a pop gem featuring Megan and Liz. The addition of drums and the soft vocals of the three musicians is the perfect formula to get the song onto the charts, as all three vocalists have the right voices for the genre. The song “A Little Peace”, which takes its name the EP, is another fun pop song from Trevor that has the biggest production of any song that he has released so far. With big sweeping “oh, oh, oh’s” throughout, the tune is very radio friendly and will make older music fans take a second listen to Trevor’s music.

“Everything I Shouldn’t Say” is a quieter ballad much in the same vein of Dahl’s previous material. With its warm guitar hooks and breathy vocals, “Everything I Shouldn’t Say” has a style that bridges Coldplay and John Mayer together, as Trevor sings a song that is honest while also being soothing. “Home Soon” is a song that is layered with drums and guitar moving to the forefront with a piano playing quietly in the background. While the song is probably the most mundane song on A Little Peace it is also the track that sticks out the most. The computerized inspired sound is something new for Dahl as a good part of his discography has stuck with an acoustic guitar and vocals, giving Plug In Stereo’s songs a more DIY (do it yourself) feel.

Trevor is well on his way to becoming one of music’s best songwriters, as his music does a great job at creating mass appeal, since his music has a relaxed and tasteful vibe. Plug In Stereo will be releasing a full length album in 2014.