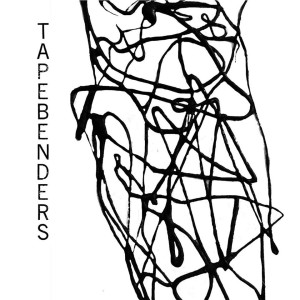 On their new record Chasing Ghosts, Milwaukee indie rock band Tapebenders neatly summarize the past five years together as a band by picking songs for an anthology album. For those who are just discovering the group, Chasing Ghosts includes songs from their EP’s, which gives listeners a taste of where the band has been and the sound that they have currently. Founded in 2008 as Elusive Parallelograms, the band released three EP’s in eleven months, and afterwards they wanted to usher in a new era for themselves, which led them to changing their name. Chasing Ghosts opens with “Absolution” an indie rock song where we hear hints of psychedelic rock, much like Widespread Panic. While the group can certainly play well, the only complaint upon hearing “Absolution” is the feeling that the band is influenced by so many different styles, that they try to cram as much of their influences into the song as they can, leading to confusion about the direction of their music.

“Written” is the records next song, and its spacey vibe goes with the bands hazy tunes. While it has a softer feel than Chasing Ghosts previous cuts, it would be a great song for the band to perform live as its sound really pulls you in and lets the listener be surrounded by what they are hearing. “Nuclear Man” is a song that brings in different influences to once again have a spacey vibe while using synthesizers heavily to give off an 80’s feel. While the nasally vocals from front man and guitarist Andrew Foys tend to drag, they still mesh with the tunes overall tone, as it sounds very psychedelic.

“8 Bit” closes out the album and its bouncy sound creates a different atmosphere for the listener as it is more upbeat, though it still gives off the varied style of the band’s music.  While we felt like there were moments throughout the record where the band tried out to many different genres, on “8 Bit” all of the bands preferred tastes come together nicely, making it sound cohesive.

While the band decided to change their name to find a new identity, after listening to Chasing Ghosts, this new release is the start of an entirely new era.