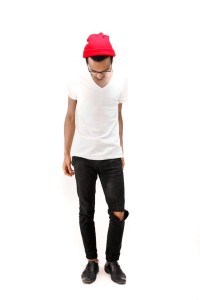 Joe Lengson, also known by his stage name The Woodsmans Babe, has written a great album with songs that folk fans will love, while pop enthusiasts will bob their heads. After leaving his heavy metal band MyChildren MyBride, he started performing folk music, and after a few listens it is clear that playing folk is exactly what Lengson should be performing. The self-titled record opens with a tune titled “Brain Damage” and as it begins with a wispy acoustic guitar, Lengson’s voice hits us and we forget his musical past, as his talent for playing softer music is obvious right from the start. While the song at times feels a bit grandiose, with the inclusion of horns, the song flows together really well, though we wonder if Lengson has any underlying influences that he will touch more on as the album continues.

“Gasoline Rainbows” is a song that spans six minutes and its instrumental flavor adds a more somber feel to The Woodsmans Babe and its pop inspired tunes. While the piano provides much of the emotion we feel throughout the song, there are other calming effects that are used to bring feeling into the track, and while Lengson wants to get away from his metal roots, it feels like he is trying to push himself a bit too far with his music, and instead we would prefer for him to stick with just an acoustic guitar and sing like we know he can. “Red or White” is the album’s closing tune, and its clean and bright acoustic start makes it the records strongest track.

While The Woodsmans Babe breaks up his sound to include more grand selections, the records simplicity makes for a great listen and should be among any record collection that includes the folk genre.