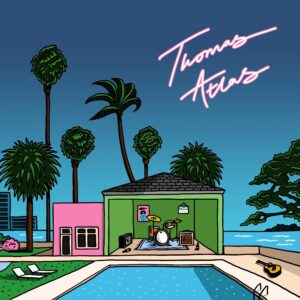 Thomas Atlas, who just released his self-titled album,  is proof that good funk still exists, and it is a showcase of what the British man has to offer to the global funk community.

Getting the party underway with “Got This Feeling”, Thomas Atlas does not hold back with his infectious grooves rising to the surface within seconds. Furthermore, the opening track sets the bar high for the entire record, and he lives up to expectation, with each track oozing grace.

Following “Got This Feeling” is “Halfway To The Moon“, another of Thomas’ earlier single releases which follows a comparable pathway. Although, here, Thomas brings even more warmth, and the hitmaker talks about a journey he is undertaking. “Going To The Moon” is most likely a metaphor for where he expects to take the album; not to the moon, as he isn’t Elon Musk, but undoubtedly to the top.

“Turn Up The Heat” sizzles from the get-go. Furthermore, it brings a jazzy bass rhythm which suddenly gets layered with soulful funk grooves. Also, Thomas shows off his vocal register with him smashing all the right notes. Likewise, his brass instruments get more of a glimpse when comparing them to the previous numbers, bringing a new dimension to album.

“Paradise Circus” is an instant heel tapper with a nostalgic aura rising out of the compound. Furthermore, Thomas takes a hint from some of the biggest names in the game who have risen out previously. But he mingles influence with his unique character, and it pays off with raw flavor.

“Groove 101″ kicks off with a myriad of sounds among a vibe that is somewhat akin to The Specials, but Thomas garnishes it with extra funk. The album concludes with “Healer” and the guitar rhythm softens the ears with its sweet tone; Thomas completes the job in style.

*This review is by Ralph Jericho who lives in London, England.