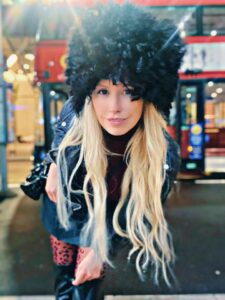 WOLFBERRY is bringing the soundtrack vibes with her latest release “Let’s Make Fire“. It is a track all about power, with WOLFBERRY pushing through vigorously throughout the song.

The track takes a hint from yesteryear, while having a kind of film score feel to it, probably influenced by Bond films from the earlier decades. Furthermore, the musical foundation roars as you may expect from an artist of this level.

Vocally, WOLFBERRY glistens with charm. Her tone is sharp, and her ability to articulate her words with profound diction is inspiring, as she carries the track from the moment she leaps to the mic. Moreover, although the music comes with potency, perhaps the best quality of the song is with WOLFBERRY’S top-class vocal.

The structure of “Let’s Make Fire” is refreshing, given that it does not follow a more generic path. As a result, the arrangement often switches up as it plays, it picks us up regularly but also takes us down a few cogs too with the music frequently shifting in pace and strength.

Overall, “Let’s Make Fire” is a gem for anyone who enjoys pop music which comes with a different angle, as it is not your everyday commercial pop track, though there is no reason why this one cannot compete for the top spot.  It is bold, and the courageous message which WOLFBERRY expresses is relatable given that we are all living in unprecedented times.