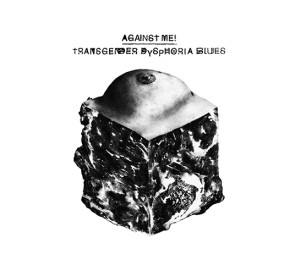 Transgender Dysphoria Blues, the latest album from Florida punk band Against Me!, is an album of energy, honesty, and for front woman Laura Jane Grace, complete freedom. Born Tom Gabel, Grace has fronted Against Me since 1997 and has written about his struggle with being transgender since the bands beginnings.  Her knack for songwriting hid her sexual feelings well, as lyrics from the bands song “Ocean” from their 2007 album New Waves which has the lyrics “I wish I born a woman, if I was born a girl my mother would of called me Laura.” Probably believing that Grace wasn’t writing about herself, the rest of the band, guitarist James Bowman, bassist Andrew Seward, and drummer Atom Willard did not pick up that Laura had a desire to be a woman. In 2012, Grace came out as transgender explaining that she had been fantasizing about being female since early childhood.

With Transgender Dysphoria Blues, the songs on the album represent a long journey that is finally finished. No longer needing to hide her desires, Laura writes about the change from male to female by being completely honest about the road she has faced, with lyrics about someone mourning the loss of a friend and their road to forge a new identity. With Grace’s trademark screaming vocals, she still has the same grit and passion that she had in previous records. Songs like “Transgender Dysphoria Blues”, the albums opening track, is a short and to the point song that talks about going into the world in your new body. “Your tells are so obvious/Shoulders too broad for a girl/It keeps you reminded/Helps you remember where you come from/You want them to notice/The ragged ends of your summer dress/You want them to see you/Like they see every other girl.” Backed by country inspired guitars and punchy drums, Laura screams with an aggression that is layered with a feeling that a weight has been lifted off of her shoulders. The album’s title track makes for a catchy and fun introduction as fans finally get to the heart of Grace’s new self. “Two Coffins”, is the albums only acoustic track, and it talks about saying goodbye to an old friend and mourning their loss, alluding to the feelings of Grace’s family and friends when she came out in 2012.

“Drinking With The Jocks” is a song that is a burst of energy which talks about hanging out with the boys and drinking the day away. While putting on heels and eyeliner may seem more fitting to Laura these days, it nice that fans see a side of her former masculine side as she dives into all of her emotions. The only complaint about the album is the balance of the sound. The band seems to overpower the vocals heavily, as the vocals seem to sitting in the background instead of sitting alongside the band. Regardless of this minor flaw, Transgender Dysphoria Blues offers a window into Laura Jane Grace’s suffering as a man and the peace that she feels standing on stage in makeup and a dress belting out punk rock songs as if she had been born female.