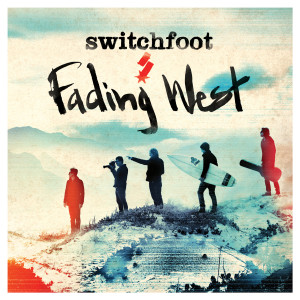 Sun, surf, and good music is at the heart of Fading West, San Diego rock band Switchfoot’s new album. With this music, Switchfoot has pushed themselves even further than they have before with songs that experiment with different sounds and a much happier and more optimistic attitude. With each album prior to Fading West, the band has written songs based around lead singer and guitarist’s Jon Foreman’s ideas, but this time the band has taken inspiration for their songs from everything that surrounds them in their personal and professional lives. Formed in 1997, Switchfoot started out as a Christian rock band, but after a few years the group was feeling that they were alienating everyone outside of the Christian music market by not playing more secular music. Switchfoot stopped playing Christian music festivals and partnering with religious organizations in order to make sure that their music was heard outside the Christian market. This new marketing tactic worked, as they achieved their first taste of mainstream success in 2003 with their album The Beautiful Letdown which had the hit single “Dare You To Move.”

The first song on Fading West, “Love Is Worth The Fight” is the perfect introduction to the record with the lyrics “I’m trying to find where my place is, looking for my own oasis, so close I can taste this.” The lyrics likely refer to the peace that the band finds while partaking in surfing, which sets the stage for the rest of the record, maintaining a laid back feel from start to finish. The song is one of the bands best, taking the big atmospheric sound of bands like U2 and completely turned the Switchfoot sound on its head. The harmony from Jon Forman’s gritty, raspy voice makes the tune have an anthem like feel. Next is “Who We Are” which is arranged beautifully. Breaking away from the massive feel of “Love Is Worth The Fight”, the songs opens with Jon counting “1,2,3, 4,5” with Jerome Fontamillas the bands keyboard player, playing a piano part that sounds like it comes straight from old school hip hop, rounding out the song’s sparse instrumentation. To bring the songs sound full circle, the band brought in their children to create a choir to sing “who we are” at different points throughout the song.

“Say It Like You Mean It” has a much harder edge than previous songs on Fading West. It’s nice that the band feels like they can mix up the feeling amongst the lighter sounds on the album. The chorus has muffled gang vocals on the song which gives “Say It Like You Mean It” a more emotional and powerful feeling, as the song is about trying to stay true to one’s self despite feeling lost.

Fading West has enough new emotions to make old fans love the band even more, while giving new fans a taste of what the band sounds like in the present as well as the past.