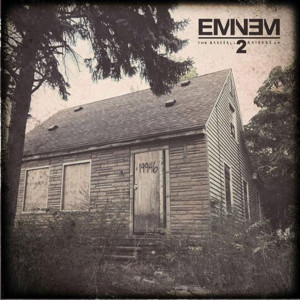 In 2000, Eminem, born Marshall Mathers, released his landmark album the Marshall Mathers LP where he was met with huge success and fame from hip hop fans around the world.  While many of the songs on the record were following in the footsteps of the gangsta rappers before Eminem such as NWA (Niggaz With Attitude), by being violent and chilling, the Marshall Mathers LP was something the hip hop genre had never heard before. Eminem was a young white man rapping about the inner city of Detroit, killing his wife, obsessed fans, and his adjustment to sudden fame. Not only was Eminem a solid rapper, but his ability to weave autobiographical content into songs that many of his fans could relate to was what made him stand out.  While many of his critics outside of the music world felt he didn’t have to lash out in the manner he did, many fans would argue that he was just telling the truth about his troubled background.  While half of the stories he told on the first Marshall Mathers record were fictional, (the song “Kim” focuses on Eminem fantasizing about murdering his wife) the other half of them were in fact true. Marshall was born in Missouri to Deborah Mathers-Briggs at the age of fifteen when she married Marshall’s father who walked out his life shortly after his birth.  In his early years, he moved between Missouri and Michigan, eventually settling in Detroit. Though friends and family have claimed that Marshall was happy growing up, he was also a loner who was into comic books and telling stories.  Before he aspired to be a rapper, he had dreams of becoming a comic book artist. Once he began participating in rap battles in high school, he decided to pursue a career in music. He released his first album Infinite in 1996 on a low budget. The album went unnoticed by radio and the music industry. It would be three years until Eminem would finally get noticed. Once he released The Slim Shady LP in 1999, he became known around the world as an original rapper that was creative with his lyrics.

While Eminem has succeeded in the past at being witty, comical, and truthful throughout his career, on his latest record the Marshall Mathers LP 2, it seems like he has lost his edge. At almost forty years of age, and nearly sixteen years in the music industry, you would think that he would come up with more to say then the subjects he discussed on the first Marshall Mathers LP. However, he does not, and the majority of the album seems stale and sets out only to please his diehard fans that have been with him since his early years. Throughout the album there are only four songs that stand out. “Monster” is a catchy tune, featuring singer Rihanna, who provides the hook in the song.  Her powerful voice is what makes the song, and throughout the many guest’s appearances on the album, hers is the one that stands out the most.  Her powerful voice shows that she can make a boring song shine, as her vocals bring spice to the song. While the collaboration seemed a bit odd at first given the differentiation in both artists’ voices, the end result goes well. “Berzerk” is one of the album’s first songs and sounds a bit reminiscent of The Beastie Boys, one of Eminem’s first rap influences.  While this particular sound may seem dated to some hip hop fans, the song is a catchy one, as it shows off Eminem’s fluency as a rapper. Despite having poor pronunciation and word flow at different points throughout the album, “Berzerk” will become a staple on hip hop radio, due to its tribute to early hip hop, and nostalgic sound to old school rap fans.

“Legacy” dives into Eminem’s childhood as we learn that Eminem “used to be the type of kid that would always think the sky is falling/Why am I so differently wired? Am I a martian?” while then going into his childhood talking about his broken family and the constant bullying he endured as a child. While the song is well thought out and put together, lyrically it seems like Eminem has run out of ideas for his songs. “Rap God” offers nothing but Eminem’s display of rapping talent. While he has nothing new to offer, if Eminem were to enter a rap battle today, he would certainly win as his rapping style is fierce. His style on this song may send listener’s reminders of rapper Twista, who is known for spewing fast rhymes faster than most people can talk. It seems like Eminem’s career is coming to a close with his bland album, but his dedicated fan base seems to be enjoying it.