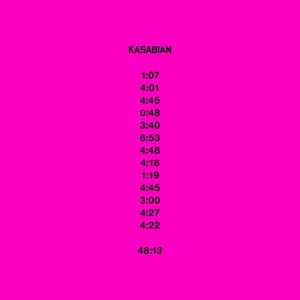 48:13 is not one Kasabian’s better albums, and after several good records it is their worst one they have released. With that said, there are certainly some moments throughout the record that give the band the energy that they have lost from the era of Velociraptor! in 2011 until now. On Velociraptor! Kasabian was writing great pop tunes that gave the band the recognition of being a good pop band who could write infectious songs. Four years later, 48:13 is boring from every angle: the album name, (which is the album’s run time,) the solid hot pink cover, the rushed music, and some of the worst lyrics the band has written so far. Kasabian was formed in Leicaster, England in 1997 and have released four albums, a self titled album in 2004, Empire (2006), West Ryder Pauper Lunatic Asylum (2009), and Velociraptor!13 in 2011. While guitarist Sergio Pizzorno said in a recent interview with Q Magazine that the album’s title is supposed to be “not about the individual songs, but about the entire body of work”, it feels like the band are trying to trudge through their songs, and in doing so they aren’t having a good time. As for its influences, 48:13 is really all over the map in trying to encompass what the band was inspired by while making the album, and often the songs feel like the band tried to piece their way the album process when choosing the songs. Everything from rock, rap, to George Harrison style guitar riffs are included on the album, and it’s hard to discern what the band wants to be on 48:13.

The album opens with “Shiva”, with an intro that builds with anticipation as Kasabian gets their fans excited for the music that follows, though what we hear next is not something that a lot of people, except for their diehard fans, will get excited about. The song breaks out into muddled guitars, and shouts of “yeah!” that attempt to make you forget about the albums horrible sound. Dumbing down their sound doesn’t work well for Kasabian, and while strong vocals from front man Tom Meighan are still present, this is the only tolerable part of the song. The band takes on more of a funky R&B feel on this opening number, and while its fine as experimentation is concerned, it feels like the album has a domino effect, where each song falls onto one another.

“Treat” one of the albums longest tracks is another funky pop song that collects itself after tracks like “Shiva” or “Bumblebee” (a song that sounds listless without any direction.) “Treat” however feels a little sprightlier and while it is not quiet the mind boggling song it wants to be, “Treat” at least allows fans to feel the groove, giving the album a much needed dose of energy which the bands wants you to feel. “Eez-Eh” the album’s first single is the albums strongest track as well as the one that you won’t forget. All throughout 48:13, Kasabian goes through many ups and downs to keep the music afloat, and at the end we get the sense that Kasabian has become creatively dry. In the band’s music video for the song, we watch the band dancing and singing the lyrics, with the lyrics being shown on a screen behind them. While this new sound might be the new face of Kasabian, it feels like they are the only ones who will be excited about it, as this style of music can only sustain them for so long.