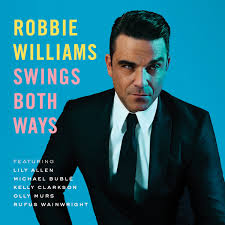 In 2001, former Take That boy band member Robbie Williams released his first swing album Swing When You’re Winning, which was a hit in across Europe. Twelve years later, Robbie is back with his second swing album Swings Both Ways. This second attempt is incredibly appealing as Robbie reminds fans that he is one of England’s greatest singers. Robbie began his music career in 1990 at the age of sixteen when he joined British boy band Take That. Take That became enormously successful in Europe with hits such as “A Million Love Songs” and “Back For Good.” Despite their success in Europe, they failed to make an impression on American audiences. While the group decided to disband in 1996, the members of the band have since released many moderately successful solo albums.  The group reunited in 2006. While Robbie’s Take That band members such as Gary Barlow have had some success as solo artists, it is Robbie that has really made an impact. Swings Both Ways is his tenth solo effort and his decision to branch out into swing and jazz music was a good one.

The album opens with “Shine My Shoes” complete with snapping and big horns that sets the tone for the rest of the album. Vocally, Robbie sounds fantastic, with charm and charisma coming through the speakers. The album also has tunes written by Robbie such as “Go Gentle” a song that that offers Robbie’s one year old daughter Teddy guidance on finding the right man. Throughout the record Robbie also duets with artists such as Michael Buble and Rufus Wainwright which adds energy and pizzazz to a record that is a winner in almost every way. While Swings Both Ways is a great record overall, there are a few tunes that miss the mark in energy and feeling. One of these tracks is “Minnie the Moocher”, which was a hit by artist Cab Calloway in the swing era. While any swing fan will be familiar with the original “Minnie…”, Robbie’s version doesn’t capture the spirit of Cab Calloway, causing the song to lose its luster. Songs like “Snowblind” slows the albums pace down and it does not fit well with the rest of the record. The energy and pep throughout the album is stopped suddenly and the change in mood and tempo sounds awkward.  Despite this, on the rest of Swings Both Ways Robbie is brimming with confidence, with Williams sounding on par with Frank Sinatra and Dean Martin. While Robbie also sounds great singing pop music, his voice fits in perfectly with the swing sound. When he is not joining his Take That band mates selling out stadiums in the United Kingdom, it may be the hope of his fans that he goes on to record more album in this style as Swings Both Ways is one of the best records of the year.