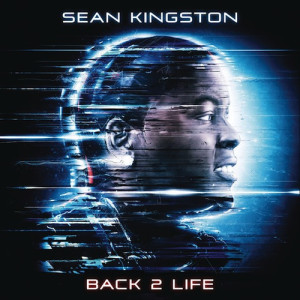 Jamaican born rapper and singer Sean Kingston is back with his third album Back 2 Life, two years after a jet skiing accident nearly took his life. Now fully recovered from the accident, Kingston latest effort Back 2 Life is meant to make a huge impact and for the first half of the album it does just that. His beats and rhymes are catchy and he is a master at writing songs that have widespread appeal, just like with his 2009 hit “Fire Burning.” While there are no “Fire Burning” tunes on this latest effort, the thumping beats, background singers, and raps complete with a Jamaican accent is still typical Kingston flare.

Back 2 Life begins with “Back 2 Life (Live It Up)”, and while the message of living life to the fullest is notable given what Kingston has gone through, the presentation of this message comes across as a tad cheesy. All we hear is “we gotta live it up” with subpar backing vocals and a mix of different beats and sounds that doesn’t get this message across very well. The album’s lead single, “Beat It” is stronger than “Back 2 Life…”  On this song, Kingston makes the case for his strong vocals, which in the rap genre doesn’t always go so well, as rapping generally trumps any singing talent. The collaboration between Kinston, Wiz Khalifa and troubled singer Chris Brown works well for the song. Both Brown and Wiz Khalifa perform well together, bringing a more intense edge to the track. “Beat It” is surely one of the best songs that Kingston has written to date, it is sure to be a memorable track for fans and non fans alike.

“Seasonal Love” is the signal that Back 2 Life is heading down the drain. While Kingston sings throughout this album, the overdubbed vocals from Kingston sound grating, and almost annoying. While it makes for a good summer time jam, after the summer ends, the tune will soon become forgotten, as the song has an overall flimsy feeling. Songs like “Shotta Luv” has generally the same bubblegum sound that “Seasonal Love” does. On this song, rapper 2 Chainz makes an appearance and his hard and dry rapping style does not suite the song. When put against Sean Kingston, 2 Chainz comes across as amateurish and inexperienced.

Back 2 Life may be Kingston’s tribute to his new lease on life, but to the rest of us it provides good background for a pool party and not much more. Sean Kingston is better than Back 2 Life suggests and sends a message that Kingston’s time as an artist is limited.